Many in the antiwar movement ardently opposed the war in Iraq while remaining silent about an equally immoral war in Afghanistan.

EIGHT YEARS into the war on Afghanistan--and with no end in sight--seems a peculiar time for antiwar activists to claim that U.S. forces need to stay there even longer for the sake of the Afghan people.

Yet Yifat Susskind, communications director for the human rights organization MADRE, recently argued on CommonDreams.org, "'Bring the Troops Home' is a bumper sticker, not a policy." She continued, "For MADRE, U.S. obligations stem from the fact that Afghanistan's poverty, violence against women and political corruption are, in part, results of U.S. policy over the past 30 years."

Code Pink cofounders Medea Benjamin and Jodie Evans began arguing for a "responsible withdrawal" after their recent visit to Afghanistan, which focused on discovering Afghan women's attitudes toward the U.S. occupation. While there, they met with a handpicked group of politically connected Afghan women that included President Hamid Karzai's sister-in-law, Wazhma Karzai.

According to Code Pink, many of these members of parliament and businesswomen opposed sending an additional 40,000 U.S. troops to Afghanistan, but also said they rely on U.S. troops for their own personal safety.

Sharon Smith is the author of Subterranean Fire: A History of Working-Class Radicalism in the United States, a historical account of the American working-class movement, and Women and Socialism, a collection of essays on women’s oppression and the struggle against it. She is also on the board of Haymarket Books.

On October 6, the Christian Science Monitor published an interview with Benjamin and reported on her change of heart, based on conversations with some of the women she met in Kabul. For example, CSM reported, "Shinkai Karokhail, an Afghan member of parliament and woman activist, told them. 'International troop presence here is a guarantee for my safety.'"

Benjamin claimed she was misrepresented in the Christian Science Monitor. Yet Benjamin herself said in a recent interview:

[W]e certainly did hear some people say that they felt if the U.S. pulled out right now, there would be a collapse, and the Taliban might take over, there might be a civil war. But we also heard a lot of people say they didn't want more troops to be sent in, and they wanted the U.S. to have a responsible exit strategy that included the training of Afghan troops, included being part of promoting a real reconciliation process and included economic development; that the United States shouldn't be allowed to just walk away from the problem. So that's really our position. 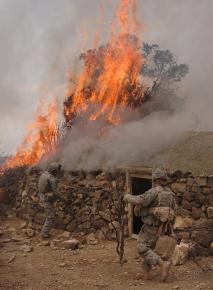 This reasoning assumes, of course, that the U.S. is capable of behaving responsibly toward the Afghan people. It is not.

The Obama administration feigned disappointment at the rampant corruption of the Karzai regime, now that the UN Election Complaints Commission has reported that widespread stuffing of ballot boxes and coercion by warlords helped Karzai "win" re-election by a margin of 54 percent this past summer. As many as one in every three votes was fraudulent, and most of them went to Karzai.

But the Obama administration hasn't yet lost faith in Karzai. Secretary of State Hillary Rodham Clinton reportedly told Karzai over the weekend "that this is an important moment where he can show statesmanship and actually strengthen his leadership position," according to administration officials.

To add to the embarrassment, Karzai was resisting the UN commission's findings. Despite a flurry of phone calls and visits, including one from Sen. John Kerry and another from former U.S. State Department envoy Zalmay Khalilzad, Karzai remains defiant. He indicated that he will only accept a decision from Afghanistan's Independent Election Commission (IEC), a body dominated by his political allies, which was also accused of involvement in the massive election fraud this past summer.

THROUGH BLACKMAIL, bribery and brute military force, the U.S. has determined the political landscape of post-Taliban Afghanistan.

U.S. conquerors installed Karzai as Afghanistan's transitional head of state in December 2001. But Karzai was never meant to build a genuine democracy in Afghanistan. Nor was he expected to champion the rights of women. On the contrary, he was chosen not for his ethical credentials, but rather for his close ties to the band of warlords with which the U.S. partnered to quickly overthrow the Taliban in November 2001.

Renamed the "Northern Alliance" for the purpose of casting these warlords as freedom fighters, in reality, they were veterans of the National Islamic United Front for the Salvation of Afghanistan, an unstable coalition that ruled Afghanistan between 1992 and 1996, when the Taliban overthrew it.

Together, they constituted seven separate Mujahideen political parties, each representing the fiefdom of a corrupt warlord. Their president, Burhanuddin Rabbani, suspended the constitution and issued a series of religious edicts banishing women from broadcasting and government jobs, and requiring women to wear veils. More severe repression soon followed.

Karzai served as deputy foreign minister in Rabbani's government, while the feuding Mujahideen parties unleashed a rein of terror against Afghanistan's already war-torn population. Women were routinely abducted, beaten and raped, or sold into prostitution. According to human rights expert Patricia Gossman, "Between 1992 and 1995, fighting among the factions of the alliance reduced a third of Kabul to rubble and killed more than 50,000 civilians. The top commanders ordered massacres of rival ethnic groups, and their troops engaged in mass rape."

In June 2002, in what the U.S. media depicted as a "flowering of democracy," a loya jirga, or tribal council, elected Karzai as Afghanistan's interim president. But most of the decisions were made behind the scenes, where then-U.S. envoy Khalilzad--a former Unocal oil executive--worked hand in glove with Karzai and the Northern Alliance to manipulate the votes. During the loya jirga, Karzai announced his own election as president before the vote had actually taken place, to the dismay of many delegates.

In the run-up to the 2002 loya jirga, eight delegates were murdered amid a general rise in political violence and intimidation by warlords guarding their own fiefdoms. Meanwhile, Karzai used a rumored plot to overthrow his government as an excuse to round up 700 of his political opponents in the weeks before the voting.

Karzai's brother, Ahmed Wali Karzai, has long been flagged as a drug trafficker in Southern Afghanistan, but the allegations have never been investigated. He continues to head the Kandahar Provincial Council, the governing body for the region.

He also has played a role in passing information to international intelligence agencies. According to Rajiv Chandrasekaran, writing in the Washington Post, while aware of information implicating Karzai in the drug trade, "U.S. and Canadian diplomats have not pressed the matter, in part because Ahmed Wali Karzai has given valuable intelligence to the U.S. military, and he also routinely provides assistance to Canadian forces, according to several officials familiar with the issue."

Under President Karzai's watch, Afghanistan has returned to providing roughly 95 percent of the world's heroin supplies, while the U.S. military looks the other way. As Jeff Stein recently reported at the Huffington Post, Republican Rep. Mike Rogers of Michigan explained, "We certainly need the president to be with us. That would be hard if we're hauling off his brother to a detention center."

THE U.S. left has failed to effectively oppose the war in Afghanistan from its onset, when the U.S. population overwhelmingly supported the war on the pretext that "we were attacked."

That support has severely eroded, and polls show that a clear majority now wants to end the occupation. Yet many on the left have remained confused for the last eight years--ardently opposing the war in Iraq while remaining silent about the equally immoral war in Afghanistan.

This confusion has apparently been compounded by the election of Barack Obama, who initially opposed the invasion of Iraq in 2003. Obama's Nobel Peace Prize notwithstanding, however, he has since embraced the aims of U.S. imperialism with gusto. U.S. troops and, perhaps more importantly, U.S. military bases remain in Iraq with no deadline for complete withdrawal.

Obama authorized a surge of 21,000 additional U.S. troops to Afghanistan soon after taking office and is now pondering whether to send at least 40,000 more. These are no longer George W. Bush's wars. Obama has claimed them for himself. So far, the only consequence of the surge has been the resurgence of the Taliban resistance against U.S. occupation. Even his pledge to close the prison camp at Guantánamo Bay remains unfulfilled.

Yet Obama maintains a substantial following on the U.S. left, sowing yet more confusion among antiwar activists. For example, in response to Obama's Nobel Peace Prize, Juan Lopez wrote in the People's World on October 12, "Now, don't get me wrong... Like other left and progressive folks, I advocate ending the Afghanistan military venture." Yet he went on to praise the award: "Most of the nation and world embraced the choice as affirmation that, with President Obama at the helm, America has embarked on a new, far more constructive course."

Likewise, Code Pink's Evans argued on womensmediacenter.com, "I left the States with a judgment about some of the women who were members of the parliament: So many are sisters and wives of warlords or tribal leaders chosen merely to fill the required quota of women. But member of parliament Shinkai Karokhal, a radical feminist from Kabul, reminded me that just their existence, that they constitute 25 percent of the body, is inspiring to women throughout the country."

Afghan women surely deserve better than parliamentary representation by the wives of warlords enforcing the lawless and repressive status quo. Those seeking alternative opinions among Afghan women can easily discover that there is no shortage of those with the courage to expose the rule of warlords and call for the immediate withdrawal of all U.S. troops.

Malalai Joya is a case in point. As a young woman, she denounced the participation of drug traffickers and warlords at the 2002 loya jirga. Soon after she was elected to parliament in 2005, she was suspended for her outspokenness. She now escapes violent retribution by wearing a burqa as a disguise.

As she wrote in the Guardian on July 25:

You must understand that the government headed by Hamid Karzai is full of warlords and extremists who are brothers in creed of the Taliban. Many of these men committed terrible crimes against the Afghan people during the civil war of the 1990s. For expressing my views, I have been expelled from my seat in parliament, and I have survived numerous assassination attempts. The fact that I was kicked out of office while brutal warlords enjoyed immunity from prosecution for their crimes should tell you all you need to know about the "democracy" backed by NATO troops.

Likewise, the Revolutionary Association of the Women of Afghanistan (RAWA) has maintained its anti-occupation principles since the war began, risking their lives to organize an underground movement in U.S.-occupied Afghanistan.

In a recent post to the U.S. antiwar movement, RAWA stated:

The U.S. and allies occupied Afghanistan in the name of "democracy," "women's rights" and "war on terror," but after eight long years, everyone knows that the situation is as critical in Afghanistan as it was under the brutal regime of the Taliban. While they talk about democracy and women's rights, on the other end, they are supporting and nourishing the diehard enemies of these values, and impose them on our people.

Washington's warmongers have been getting away with mass murder in Afghanistan for far too long. Obama is now at the helm of this disastrous imperial adventure. "Troops out now" is the only viable exit strategy, yet it can also easily fit onto a bumper sticker. Those who argue for prolonging the U.S. occupation until the U.S. transforms its mission into a benevolent one are likely to be kept waiting forever.