We're familiar with that claim coming from the right-wingers who make a career out of attacking "big government" programs. Back in the mid-1990s, then-House Speaker Newt Gingrich declared that poor children were being coached by their parents to fake crippling diseases in order to qualify for the government's Supplemental Security Income (SSI) program. Gingrich claimed kids were "punished for not getting what they call crazy money, or stupid money. We are literally having children suffering child abuse so they can get a check for their parents."

But that's par for the course from a reactionary hater of the poor like Gingrich. It's much more surprising to hear a version of this argument--dressed up in kinder language, but no less biased and deceptive--coming from National Public Radio's normally excellent show This American Life.

This American Life's episode was called "Trends with Benefits" and featured Chana Joffe-Walt, a journalist with NPR's "Planet Money" unit, on the rapid growth in government programs providing benefits for the disabled. 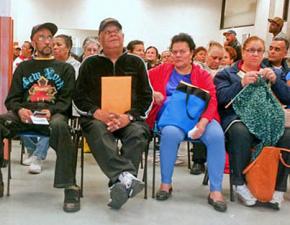 Over the course of an hour, Joffe-Walt implies that disability programs share the blame for everything from high unemployment (they keep the unemployed from finding a job) to low test scores in public schools (they discourage disabled children from trying hard).

The same basic story was repackaged for a series of reports on NPR's All Things Considered news show and for a website feature titled "Unfit for Work: The Startling Rise of Disability in America." (I'll concentrate on the website feature in order to quote directly from her writing.)

In all three places, Joffe-Walt's basic contention is that disability benefits have become "a hidden, increasingly expensive safety net" that has taken the place of welfare--in the wake of "welfare reform" passed under Bill Clinton in the 1990s--as a government program to be abused.

But the reality is quite different. Disability payments provide fairly meager help to some of the most vulnerable people in society--people born with disabilities, disabled veterans, people injured on the job, and older workers who have chronic conditions that make it impossible to continue in a job.

Though it comes from NPR, with its reputation for being "liberal," Joffe-Walt's reporting is part of an ideological campaign that seeks to justify the austerity agenda that dominates U.S. politics--and to provide cover for further cuts in what remains of the social safety net, from programs for the disabled to Social Security retirement benefits and the Medicare and Medicaid health care programs.

As is the case with these other targets of the budget-cutters, there's actually plenty of money to provide the aid that people need to cope with disabilities--if the government would tax the rich, switch off the Pentagon war machine and cancel the giveaways to Wall Street and Corporate America.

JOFFE-WALT'S reports begin with Hale County, Ala., where just under one in four working-age people are on disability. According to Joffe-Walt, people with conditions such as chronic back pain, diabetes and high blood pressure have been declared disabled by a local doctor, while other people with the same affliction--ranging from a Hale County judge to Joffe-Walt's editor at NPR--aren't considered disabled.

The difference, as Joffe-Walt admits, is that for most people in Hale County--the judge aside--the only jobs available require manual labor that is difficult if not impossible to perform with a condition like high blood pressure. Joffe-Walt seems to accept this reality--yet she wonders if one particular doctor "was running some sort of disability scam, referring tons of people into the program."

Moving to the general picture, Joffe-Walt admits: "Part of the rise in the number of people on disability is simply driven by the fact that the workforce is getting older, and older people tend to have more health problems." But she then goes on to declare that

disability has also become a de facto welfare program for people without a lot of education or job skills. But it wasn't supposed to serve this purpose; it's not a retraining program designed to get people back onto their feet. Once people go onto disability, they almost never go back to work. Fewer than 1 percent of those who were on the federal program for disabled workers at the beginning of 2011 have returned to the workforce since then, one economist told me.

The implication is that going on disability is a choice people make in order to drop out of the labor force. Joffe-Walt suggests that it's the existence of a social safety net--and not a persistent jobs crisis or, for that matter, the many hazards of today's society, ranging from war injuries to more dangerous workplaces--that keeps people out of work.

Joffe-Walt also--stunningly--takes aim at disability benefits for children, including cash benefits for the very poor in the form of Supplemental Security Income. In one of the many anecdotes that Joffe-Walt substitutes for facts, she reports, "People in Hale County told me that what you want is a kid who can 'pull a check.'"

She uses the case of Jahleel, a child with a learning disability, to argue that because his mother depends on SSI payments that are contingent upon Jahleel's disability status, the program discourages children from going to school, doing well in school and becoming independent adults.

Finally, Joffe-Walt goes after what she calls the "disability-industrial complex"--which she argues works to "push more people onto disability" while the government allegedly has nobody on its side to defend against cases of fraud.

Writing at The Century Foundation website, Harold Pollack pointed out that NPR listeners:

might be surprised to discover that the final award rate for disability applications has averaged about 45 percent. Moreover, low employment rates among denied applicants suggest that disability assistance is not inducing otherwise-employable people out of the workforce. The misfortunes of people wrongly denied benefits, the problem of sick people bleeding money as the ponderous bureaucratic process moves along, the plight of disabled people stick on the Medicare waiting period--these matters were also left unexplored.

Pollack also documents that rise of children receiving SSI benefits--which Joffe-Walt made a big deal about in her reports--has been "dwarfed by the decline in the number of children receiving cash assistance after the 1996 welfare reform." According to Pollack, there is little evidence that disability payments have picked up the slack from millions of people being dropped from the welfare rolls.

According to Michelle Chen, writing at In These Times, most of the increase in disability rolls in recent decades is attributable to an aging workforce, the entrance of women into the workforce and the increase in the retirement age before seniors can receive full Social Security benefits. For those who do receive disability payments, this is the only thing standing between them and abject poverty.

"The real story is that disability does pretty much what it's supposed to. Established during the growth era of the late 1950s as a stopgap for people forced out of work by long-term impairments, the program issues meager monthly benefits to workers and their families through the Social Security Administration, averaging $1,100. Some heavily disadvantaged people with disabilities receive additional Supplemental Security Income payments.

Among other facts, she points out that more children are receiving SSI today not because their parents are using them to "pull a check," but because child poverty has increased to shocking levels, from 11.6 million in 2000 to 15.5 million in 2009. At the most basic level, this means many more children now meet the income requirements to receive SSI benefits.

Groch-Begley also shows that rather than a system of largesse, disability benefits are highly restrictive: more than one-half of all claims are eventually denied, and just one in four children with disabilities qualify.

While the benefits are relatively meager, SSI is a vital resource, according to the Center for American Progress, which "reduces costly and harmful institutionalization of children with severe disabilities" and "reduces poverty and increases economic security."

With millions of people out of work, an aging population faced with an uncertain future in retirement and mounting health care costs, and millions of children in poverty, there's a need for a stronger social safety net. But the U.S. ruling class is pushing a different agenda: reduced living standards for the working class, which are intended to increase the competitiveness of U.S. corporations worldwide.

Reports like Chana Joffe-Walt's smear of disability programs fit perfectly with the ideological campaign required to justify cutting away what remains of the social safety net.

A MORE honest look at disability would paint a very different picture. Life for the disabled and their families is far from easy. They are more likely to live in poverty and suffer from unemployment than the population at large.

Poverty rates are much higher for disabled people--27.8 percent in 2011, nearly twice the overall rate of 15 percent. And these numbers understate the true poverty rate, since the official federal poverty line, which in 2011 was $11,484 for an individual and $23,021 for a family of four, is abysmally low.

Joblessness is also much higher among the disabled than the national average. According to the 2011 Disability Status Report, just one third of working-age people (aged 21 to 64) with disabilities were employed--and only one in five had full-time, full-year work.

Disabled people face multiple barriers to receiving the health care they need. According to the Centers for Disease Control, in 2009, 27.4 percent of disabled people reported that the cost of health care limited their access to treatments they needed. This is more than twice the percentage for non-disabled people.

On top of all of that, applying for and receiving benefits is incredibly difficult. From 2001 to 2010, just 28 percent of initial disability benefit applicants were awarded benefits on average, according to the Social Security Administration. Even after reconsideration on appeal, disability claims were denied 53 percent of the time.

The benefits for those who do qualify are meager. In February of this year, Average monthly disability benefits were $978.52, and the average monthly SSI payment was just $526.41.

Theresa, who has Crohn's disease, lives in New York City on $730 per month in disability benefits. She described the process to get benefits as a bureaucratic nightmare:

It took three years and a hearing in front of a judge. It was a constant documentation of every hospital stay, every hospital I had ever been to, along with every doctor, every name and address, every medication, and every employer, my salaries and length of employment. It was a nightmare of paperwork that had to be re-filed after every denial. It was devastating to be denied, and I would never have been able to keep going without my mother and my rep's help. That is deliberate, and everyone in the process except the patients know it.

And yet the money is certainly there to make the lives of people like Theresa far more comfortable. In just three months last year, corporate profits totaled $1.75 trillion, more than twice the amount spent on Social Security benefits for the entire year and more than 10 times the amount spent on disability programs.

With corporate rates at a 40-year low, raising taxes on business and lifting the regressive income caps on payroll taxes could easily cover an increase in benefits so that the disabled don't live in poverty--as well as a jobs program to deal with the unemployment crisis.

In reality, it all comes down to priorities: What's more important, providing for the needs of the many or indulging the boundless greed of the few?