Lawmakers are preparing harsh cuts in a program that's critical for millions of people.

UNEMPLOYMENT IS stubbornly high, and many people are still reeling from the effects of the Great Recession. So what's Congress' plan to get people back to work? Here's their grand idea: Make the unemployed go hungry to really motivate them to find a job.

On June 20, by a margin of 234 to 195, the House defeated the proposed farm bill that emerged from the House Agriculture Subcommittee. The bill, which sets agriculture policy as well as spending on nutrition assistance, would cut $20.1 billion over 10 years from the Supplemental Nutrition Assistance Program (SNAP), more commonly known as food stamps.

That's a drastic reduction. But a number of Republicans thought it wasn't drastic enough, so they voted against the bill.

The battle over how much to slash from the food stamps program--with Democrats standing for only slightly less draconian cuts--perfectly illustrates the twisted priorities of the political establishment in the era of austerity. The political leaders of both main parties want to gut a social program exactly when the need for it is greatest--but if you're a banker or a businessperson, you can get almost anything you want from Washington. 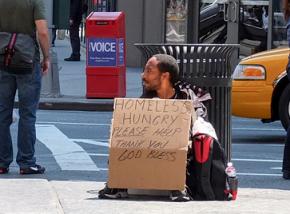 WHEN IT comes to programs like food stamps, conservatives don't even try to hide their contempt for the poor.

Thus, Diana Furchtgott-Roth, a fellow at the right-wing Manhattan Institute for Policy Research, says that SNAP discourages people from working. "If you earn above a certain income, you no longer qualify," said Furchtgott-Roth. "[And if you're receiving SNAP benefits], you don't have as much pressure to go get a job."

As if the main obstacle for people seeking work is their lack of motivation rather than the lack of jobs.

Furchtgott-Roth even comes armed with statistics. "In 2009, when the economic recovery began, 11 percent of the population was on food stamps," she explained. "Now, four years later, it's 15 percent even though unemployment has decreased."

But Furchtgott-Roth, who just finished saying that workers who earn above a certain income don't qualify for assistance, fails to draw the obvious conclusion: The reason more people are on food stamps even after unemployment fell is because the jobs being generated in the current economy pay so little that many workers still qualify for food stamps--and in fact need the program to adequately provide for themselves and their families.

Actually, the government's food stamp program has an especially successful record of providing a safety net for the elderly, disabled or temporarily unemployed, while supplementing the wages of low-income workers. In this sense, food stamps also serve as a kind of corporate welfare for low-wage employers like Walmart and McDonald's, whose workers otherwise wouldn't be able to keep themselves and their families going on such paltry wages.

According to the Center on Budget and Policy Priorities:

HOUSE MINORITY Leader Nancy Pelosi expressed outrage at the farm bill that came to the floor of the House for a vote in June. "We're taking food from the mouths of babes," she pleaded. "What else is there to say?"

And it's hard to disagree with her assessment. The defeated legislation would terminate SNAP eligibility for nearly 2 million low-income people, and 210,000 poor children would lose access to free school meals when their families lose SNAP benefits.

But even before further cuts, SNAP benefits already don't ensure adequate nutrition for poor people in the richest country on earth. The average monthly SNAP benefit per person is $133.85--or less than $1.50 per person per meal.

SNAP benefits don't last most recipients the entire month. On average, 90 percent of SNAP benefits have already been redeemed by the third week of the month. Feeding America, the largest network of food banks in the U.S., found that 58 percent of its clients currently receiving food stamps must turn to food banks for help at least six months out of the year.

So Pelosi's right--Washington is taking food from the mouths of babes.

But the Democratic leader's outrage wasn't entirely honest. Pelosi and other House Democrats were prepared to vote for the farm bill with the $20 billion in cuts to SNAP--until Republicans passed an amendment with a work requirement that would compel recipients, including parents with young children and even many disabled people, to sign up for job training. And not just any job training, but job training for which there is currently no funding.

The amendment was typical of the Republican's cruelty toward the most vulnerable people in society. But that doesn't mean there was any excuse for Democrats to support the farm bill before the amendment was added.

The food stamp program shouldn't be cut at all. In fact, it should be expanded. That's not only because SNAP benefits make the difference between scraping by and outright destitution for many families--though that's reason enough. But in addition, spending on food stamps has a significant stimulus effect on the wider economy, creating $1.70 of economic activity for every $1 spent. Thus, food stamps cuts will only further dampen the already weak economic "recovery."

IF THE Democrats truly wanted to challenge the Republicans' tirades about poor people sponging off "the rest of us," they might want to draw our attention to Rep. Stephen Fincher. He's a Tea Party Republican from Tennessee, who distinguished himself during debate about the farm bill by using Biblical references to complain that the food stamp program authorizes "Washington to steal [money from some] in the country and give to others in the country."

It turns out that Fincher has been raking in taxpayer dollars on a scale that no food stamp recipient could imagine. Between 1999 and 2012, Fincher received $3.48 million in farm subsidies from the federal government, making him the second-largest recipient of farm aid among members of Congress and one of the largest recipients in the history of Tennessee.

While Fincher pocketed $250,000 a year in subsidies over the last decade, the average SNAP recipient in Tennessee got $1,586.40 annually to help purchase basic foodstuffs. And after voting to cut $20 billion from food stamps, Fincher advocated for a proposal to expand crop insurance subsidies by $9 billion over the next 10 years.

So who's taking money from whom?

But there's a reason why Democrats like Pelosi won't focus attention on such an easy target--because the Democratic Party is every bit as committed as Republicans to imposing austerity policies that hammer working-class living standards, while the well-to-do continue to enjoy the spoils. They differ only on how much to cut.

Cutting funds for programs like food stamps that help the poor is only one part of the austerity agenda--and Democrats are leading the way in other areas. For example, Barack Obama's proposal to Republicans earlier this year for a "grand bargain" that would include significant cuts in Social Security and Medicare--a shock to many of his liberal Party supporters--was public knowledge four years ago for anyone who cared to notice.

As Eric Zuesse wrote at Salon.com in April:

Just four days before his inauguration in January 2009, a Washington Post headline blared, "Obama Pledges Entitlement Reform," and detailed "a wide-ranging 70-minute interview with Washington Post reporters and editors," in which the president-elect endorsed efforts by congressional Republicans, and "the Blue Dog Coalition of fiscally conservative Democrats," to cut Social Security and Medicare."

To Obama, his plan to cut Social Security, Medicare and Medicaid, while funding the Wall Street bailout, was an act of political courage. (In his interview with the Washington Post, he "pledged to expend political capital on the issue.")

The new farm bill adds amendments requiring drug testing of SNAP recipients and barring anyone with a felony drug conviction from eligibility--in order to "hold recipients accountable." But the trillion-dollar bailout of the big banks didn't come with such strings attached--nor any measure to hold the bankers accountable.

So it's no surprise that, according to the New York Times in April, "[t]he banks that created risky amalgams of mortgages and loans during the boom--the kind that went so wrong during the bust--are busily reviving the same types of investments that many thought were gone for good. Once more, arcane-sounding financial products like collateralized debt obligations are being minted on Wall Street."

Welcome to the looking-glass economy--a staggeringly irrational world where the biggest and best-connected players make massive profits by turning government money into private wealth while the working poor are demonized for accepting $150 a month to help them put food on the table.

A world in which 10 years' worth of proposed cuts in the food stamp program that helps the most vulnerable people in society would amount to 0.08 percent of the $21.9 trillion in wealth collectively controlled by the richest 1 percent in U.S. society.

Contrary to the Tea Party hysteria, taxes for wealthy individuals and corporations are at historic lows. But no mainstream politician from either party has any plans to meddle with the fortunes of the super-rich. That's because a lot of them are the super-rich--and all of them are devoted to the interests of the wealthy.

Programs like food stamps, like Social Security and Medicare, were the product of sustained and militant social struggles organized by working people. That's what we must look to today if we want to turn the austerity tide.