Imagine all the people...

Phil Gasper reviews a book that asks what a socialist United States would look like.

But as this stimulating new book shows, it is possible to liberate our minds and imagine "what life could be like in the United States if we had economic as well as a real political democracy."

Imagine: Living in a Socialist USA is a collection of over 30 short essays by a wide range of political activists and writers.

The book is divided into three sections. First, there's a summary of "What's Wrong with Capitalism?" and why we need an alternative to it by Paul Street. Second, 20 essays on "Imagining Socialism," ranging over such issues as the environment; economic democracy; the law; alternatives to prison; human rights; personal, emotional and sexual life; women's liberation; gay liberation; drugs; immigration; welfare; food; housing; health care; education; art; science and technology; and the news media. The final section consists of 10 essays under the heading "Getting There: How to Make a Socialist America." 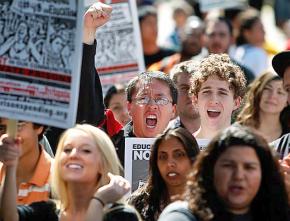 PAUL STREET'S opening article explains why another world is necessary, exposing capitalism as "the taproot of economic collapse, social breakdown, imminent environmental collapse, and authoritarian state failure in both the United States and the world."

But it is the second section that is the heart of the book. In a short review, I can't comment on all of the topics discussed, but I can mention a few that give a flavor of the collection.

In his contribution, the economist Rick Wolff rejects both the capitalism of the West and what he calls the "state capitalism" of the former Soviet Union and the People's Republic of China, where workers had no real say in how the companies they worked for were run. By contrast, genuine socialism requires workers' control of their workplaces, Wolff writes:

[I]n democratically organized socialist enterprises, the direct workers would function collectively as the board of directors, strongly influenced by the auxiliary workers. Instead of workers (the majority) being ruled and exploited by boards and major shareholders--a small minority--the workers would make crucial economic decisions and decide how to distribute the money their work brought in.

Wolff goes on to argue that this change in the internal structure of companies would result in "decisions systematically different from those of capitalist enterprises."

One of my favorite pieces is the discussion of "Alternatives to the Present System of Capitalist Injustice" by political prisoner Mumia Abu-Jamal and Angela Davis. Abu-Jamal and Davis contrast indigenous systems of justice with what exists in the U.S. today--"a legalized system of violence against unprivileged communities, who have been the historical bogeymen of the American body politic."

In place of the current system, they advocate community courts, based on principles of non-retributive justice, which can only be brought about by creating a political movement as powerful as the one that led to the abolition of slavery.

In the book's shortest contribution, Renate Bridenthal imagines "A Woman's Workday in a Socialist USA"--a world in which everyone has the opportunity of creative work, the workweek has been reduced to 25 hours, and "having children while holding a job is no problem" because affordable child care is available for everyone.

Mat Callahan looks forward to a time when "Art will no longer be forced to conspire with its own enslavement." Capitalism, with its relentless drive to turn everything into a commodity, ultimately undermines the raison d'être of artistic activity. Callahan writes:

People make art because they love to make it. Buying and selling have nothing to do with this. Indeed, what separates art from the making of other things is that it does not need a purpose or use other than the joy it brings and the insight it provides. It is nevertheless a component of human existence without which we would be no different than other animals.

In a society no longer driven by the relentless pursuit of wealth, in which cooperation rather than competition is the norm, "art may eventually cease to be a separate and distinct category and instead be woven into the fabric of social life."

ALL THIS is inspiring, but is it anything more than a utopian dream? Paul Le Blanc's essay on "The Third American Revolution: How Socialism Can Come to the United States" in the book's final section takes up this question. According to Le Blanc:

In the United States today, there is a broad array of forces that could crystallize into a mass socialist movement: working-class people who want to fight back against capitalist austerity measures...radicalized trade unionists, environmentalists and Green Party supporters, veterans of the Occupy struggles, assorted left-wing groups, activists against various forms of racism and bigotry who see links between human rights and economic justice, people who are tired of seeing money that should go to human needs being spent on militarism and military adventures, and the growing number of others who are frustrated and furious over economic injustices that are coming down on them.

Hope for the future involves uniting this large group of people into a left-wing coalition "independent of any pro-capitalist politicians."

Imagine: Living in a Socialist USA is not particularly good at responding to arguments against socialism (Alan Maass' little book The Case for Socialism does a better job of taking those on), and because the essays are so short, most of them raise as many questions as they answer.