Raising our voices for women’s liberation

The history of International Women's Day has a lot to teach a new generation participating in the struggles of the Trump era, writes Elizabeth Schulte.

INTERNATIONAL WOMEN'S DAY became a focus of attention in the U.S. this year in a way that it probably hasn't been since it was first celebrated more than a century ago. Women and men around the country will raise their voices on March 8 against inequality, discrimination and sexism.

Actions today include a Women's Strike, initiated by prominent left-wing scholars and activists as part of an international day of action, with an emphasis on building "feminism for the 99 Percent"--and A Day Without a Woman, supported by organizers of the Women's March on Washington in January, and in solidarity with the Women's Strike.

Supporters of the call are invited to strike if possible, but are also to take part in other ways, from organizing a rally in their city or a teach-in on their campus, to holding a meeting about history of International Women's Day, to showing solidarity with a local labor struggle. The events promise to be inclusive, involving women of color, trans women and others who are marginalized in this society. 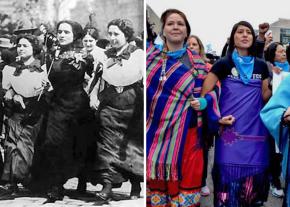 This revived attention to a holiday that celebrates women workers, some of the least-celebrated members of society--and a socialist holiday on top of that--is another welcome sign of a new resistance that has erupted since Donald Trump's election.

We saw the potential for a new fight for women's liberation on January 21, when at least 3 million people turned out for Women's Marches across the U.S. to protest the new Sexist-in-Chief. Now, March 8 is raising other issues and, in particular, focusing attention on women's labor. Whatever the character of the actions today, this is an important development.

There's a new audience for ideas about how to fight sexism and inequality, and some part of that audience at least will participate in reviving the left-wing tradition of International Women's Day.

AT ITS core, International Women's Day is about recognizing the struggles of women workers--women whose names don't ordinarily make the front pages. Like Clara Lemlich.

Lemlich was a 23-year-old Ukrainian-born leader of the 1909 strike of garment workers called the "Rising of the 20,000"--which pitted an immigrant women, most of them teenagers, against sweatshop bosses who forced them to work in hot, dangerous working conditions for long hours.

Even though Lemlich was quite young, she was already steeled by several workplace struggles, having organized in the garment industry for several years before. That wasn't true of her co-workers, though. Some the most vulnerable workers in U.S. society--young immigrant women who defied their union leaders' caution in voting to strike--learned through the course of the struggle that solidarity made them stronger.

"They used to say you couldn't even organize women," Lemlich concluded. "They wouldn't come to union meetings. They were 'temporary workers.' Well, we showed them!"

Inspired by the struggle of women workers like Lemlich in the U.S., Zetkin helped initiate the resolution in order to emphasize the role of women workers and also the commitment of socialists to take up issues of women's oppression and support women's suffrage.

At the Copenhagen conference, attendees discussed the issue of universal suffrage--which was hotly debated among socialists, men and women alike--programs to help women and their children, as well as opposition to war and the demand for the eight-hour day. Zetkin, along with Russian delegate Alexandra Kollontai, argued that socialists must link political and economic demands for women workers, like suffrage.

As a leader in the German Social Democratic Party, trade unionist and editor of its women's magazine Die Gleichheit (Equality), Zetkin furthered a materialist analysis of women's oppression, looking at how it affected women at every strata of society, and developed an understanding of how working-class women's liberation was intertwined with their male counterparts.

Zetkin concluded that it is in working-class women's interest to join forces with working-class men to overturn a system that exploits them both. Because of their class and their ability to shut down workplaces by stopping work, working-class women and men were in the best position to win liberation for all.

THE REVOLUTIONARY potential that Zetkin and other socialists talked about became a reality spectacularly on International Women's Day in Russia in 1917, when women, angered by shortages of bread and food, went on strike to oppose the First World War, high prices and bad working conditions.

The women's protest strike drew out male workers, and the fuse was lit--International Women's Day would be the first day of the Russian Revolution.

In the process of workers' taking power, socialists saw the importance of putting issues of women's liberation to the front and creating the conditions in which true liberation might be possible. The Russian revolutionaries knew they couldn't simply decree an end to oppression, but had to get at its material roots.

One key to this was freeing working women from the double burden they bear in the home--cooking, cleaning and caring for children, or what Russian revolutionary Lenin called "barbarously unproductive, petty, nerve-racking, stultifying and crushing drudgery." The new workers' state established by the end of the 1917 revolution organized communal restaurants and laundries, and child care centers.

Because of revolutionary Russia's isolation and poverty, these impressive gains were unfortunately short-lived before a counterrevolution led by Joseph Stalin reimposed the old order, though with the language of socialism falsely intact. Nevertheless, Russia's revolution gave an impressive glimpse as what was possible in a society where human liberation is the priority.

OF COURSE, we're a long way off from demands for communal kitchens and free child care centers--although it's easy to imagine, considering what would happen if the vast resources of U.S. society were redirected for human need.

However, over the last few months, many of us have found out that there's more to be hopeful about, even as we look down the barrel of four years of Donald Trump.

Trump's victory led to an outpouring of opposition that reached a high point--so far--with the Women's March on Washington and sister demonstrations around the country on January 21, but continued in the weeks after with inspiring mobilizations in support of women, immigrants and Muslims.

That doesn't mean we don't have major fights ahead--a Republican Congress set on defunding Planned Parenthood, for one thing, and the fact that Trump's victory has given the green light for every anti-woman politician, anti-choice group or individual to act on their bigotry.

The massive protests we've seen so far give reason for optimism, but there's no jumping over the sobering fact that our side is just beginning the process of organizing ourselves to fight back.

There are important debates about what tactics and strategies have worked in the past--especially in the struggle to defend and expand women's rights, because in the U.S., that struggle has largely been dominated by organizations that concentrate on electing Democratic Party politicians to fight for us.

Of course, most of the people coming out to protests for the first time in this new era of Trump likewise look to the Democrats to defend women's rights. But unlike political leaders who thrive on the idea that they are women's only hope, many of the people who voted for them are anything but thriving.

With a new resistance emerging, especially around women's rights, we have an opportunity to have a discussion about why the old strategy of having faith in the Democrats hasn't worked--and what could work instead.

Beneath the strategy of looking to Democrats lies a deeper problem--the idea that the masses of people can't change things for themselves, so we need a leader to do it for us.

It's an idea that came up when the political wing of Planned Parenthood argued with supporters to cancel counterprotests organized when the right wing called a day of action outside clinics in February. We haven't seen the last of it.

The exciting thing about this new political moment is that large numbers of people are ready to take action--whether for the first time ever, or the first time in a while--and in the course of the struggle, they can learn the lessons of doesn't work, and be a part of initiatives and organizations that do. The left has the greatest opportunity in a generation to engage with an audience on this scale and make our politics relevant.

THERE'S ANOTHER reason to celebrate this socialist holiday on March 8--because we have a lot to learn from the struggles when women workers fought back.

International Women's Day is about Clara Lemlich, who organized her immigrant co-workers to stand up. It's about low-wage workers in the Fight for 15 campaign who are exposing sexual harassment on the job and explaining why challenging it goes hand in hand with raising wages for all workers.

It's about the immigrant women textile strikers in Lawrence, Massachusetts, who sent their children to supporters in cities across the country in 1912 so that they could fight their battle without worry. And it's about Chicago teachers whose 2012 strike won the support of parents across the city by linking struggles against racism, school "reform" and the Democratic mayor's austerity agenda.

International Women's Day is about all the acts of solidarity and creativity that grow out of workers' own struggles, and the debates they had along the way about what could make their common fight stronger.

This is how we strengthen our side and help rebuild a left tradition in the U.S. among a new audience. There's a rich socialist tradition to learn from--and a thirst for a political alternative emerging alongside the new radicalization.