Fainan Lakha reports on Trump's ban on transgender military servicepeople--and makes the case that the left has to take a stand against discrimination and oppression.

IN A string of tweets on Wednesday, Donald Trump announced a reversal of last year's decision by the Obama administration to allow openly transgender people to serve in the U.S. military.

Trump's declaration appeared to take official Washington, including the Pentagon, by surprise. The next day, the chair of the Joint Chiefs of Staff issued a statement that the military would take no action until Trump officially submitted his ban to the Secretary of Defense.

Trump claims his ban is motivated by concern about health care costs. But there is a wider attack underway. The same day, the Justice Department filed a legal brief arguing that federal law does not bar discrimination based on sexual orientation.

Make no mistake: Trump's announcement is part and parcel of a right-wing offensive against the rights of all LGBT people, and trans people in particular. This assault has included, most notoriously, restrictions and laws against access to bathrooms that correspond to their gender identity--with the Texas being the latest state government to take up this reactionary proposal. 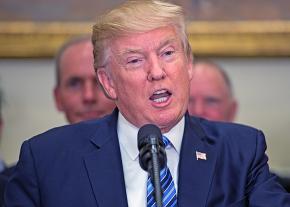 Trump's ban on military service is meant to send a clear message: Trans people's needs are not legitimate because they are not fully human nor truly citizens. It is an appeal to Trump's base that is driven by nationalism, racism, transphobia and other forms of bigotry.

Yet some on the left have questioned whether we should defend the right of LGBT people to serve in a military that carries out the priorities of U.S. imperialism.

But there should be no compromising on equal rights for trans people or any other oppressed group--and no question about opposing Trump's bigoted action. The civil rights of all communities must be defended without compromise, whether the queer and trans community, undocumented immigrants, African Americans or others.

This would be the country's largest employer banning an entire group based on their gender identity. Thousands of trans people, along with their family and friends, will be negatively impacted if Trump's tweeted announcement is implemented.

Moreover, opposing the right's offensive against basic democratic rights is a critical project for the U.S. left today--and every front in that struggle contributes to building a stronger overall resistance, motivated by a vision of an alternative that includes peace and justice among its highest priorities.

There is no contradiction in opposing discrimination, legitimized at the highest levels of the U.S. state, and also condemning imperialism and U.S. military violence.

TRUMP'S BAN is an attack on equality that serves to legitimate violence and discrimination against trans people inside and outside the military.

Even within the military itself, we aren't talking about a small number of people: A 2014 study by the UCLA School of Law's Williams Institute estimated that there are approximately 15,500 transgender service people on active duty in the armed forces or National Guard and Reserves, and a further 134,000 trans people who are veterans or are retired.

These people's income, pensions, health care and/or access to education could be affected by Trump's ban. We can't allow these necessities to be subject to the whim of an employer of any sort, let alone one with as terrible a record as the US military.

And let's not forget that the U.S. military is the largest employer in the world. Trump's decision will set a precedent for other employers to follow in victimizing already marginalized employees--and this is in a country where only 20 states have passed laws providing employment protections for trans people.

Even before it is implemented, Trump's announcement will encourage more gender policing and violence, with the likelihood of increased gender-based violence for anyone who is non-binary, trans or even a cis woman.

For those servicepeople who aren't out, the fact that they are transgender will give their employer greater capacity to coerce and discipline them--including giving superiors the capacity to demand sex in exchange for job security.

That's the reality inside the military, but Trump's highly publicized decision is certain to encourage acts of violence and bigotry beyond the military, as the right-wing hysteria against trans people already has.

SOME ON the left say that the military and trans people are "better off without each other." This argument may be motivated by anti-imperialism and resistance to the idea that all we are fighting for are the mainstream LGBT priorities of inclusivity and representation. It might also arise from concern about the safety of trans people who might be injured or killed while on duty. But it is misguided for a couple reasons that are worth going through.

For starters, saying this would mean ignoring the large numbers of trans servicepeople and veterans who are already connected to the military and will be immediately affected if Trump gets away with this ban.

Opponents of oppression can't simply ignore the people who will bear the brunt of Trump's hate. And they will--this is what happened during the period of "don't ask, don't tell" during the Clinton era, when the military was able to force gays and lesbians in other-than-honorable or dishonorable discharges, meaning their right to benefits as veterans was stripped from them.

Then there's the assumption that trans people won't join the military if Trump bans them. But let's remember that openly trans people were already banned from the military until last year--and there are an estimated 134,000 trans veterans or retirees who signed up under conditions of discrimination.

Many working-class and poor people of all genders and sexual identities seek to join the armed forces not because they want to follow the orders of U.S. imperialism, but because the military provides what they have limited access to: jobs, housing, health care, education, legal status.

The entire predatory nature of military recruitment is based not on finding people who are ideologically committed to the imperialist project, but preying on people who are economically and socially vulnerable.

To the extent that this left-wing argument is motivated by opposition to U.S. imperialism, it also misunderstands who and what is responsible for war and violence.

Imperialist wars have always been declared by the economic and political rulers of society, but fought by the poor and vulnerable, who are forced to follow the orders from above. To suggest that excluding trans people will weaken the military machine and U.S. imperialism is to believe the orders which guide them come from the ranks. They don't.

To say this doesn't mean that that we want to support the military or encourage people to join it in any way. On the contrary, socialists organize against all imperialist wars and protest military recruitment on college and high school campuses.

We want to take the money devoted to the bloated Pentagon and use it to increase social services for all people--including veterans, who are at high risk of homelessness and more due precisely to inadequate health care and other supports after they leave the military.

Trump's justification for the ban--that it is a question of health care costs--is particularly telling in this moment. Besides the fact that the military has an enormous budget that can easily absorb the health care needs of all its trans servicepeople, Trump's statement can be read in the light of the Republican attack on health care. By arguing that trans health care is a luxury, Trump is using trans people as a scapegoat in the Republican fight to further undermine access to needed care.

This would do tremendous harm to trans people, some of whom join the military precisely to get access to the surgeries they need in order to feel like life is worth living--while risking their lives in the process. Trump's action, if it is implemented, will only further limit the availability of surgeries that are necessary for people's survival and contribute marginalization, poverty and susceptibility to violence.

As for all of the members of Congress who have been speaking out against Trump's anti-trans ban, they have a simple and concrete way to oppose it: Vote against the shockingly expensive defense spending bill now before the House.

The point was made well by trans veteran Chelsea Manning, who tweeted following Trump's announcement: "Today is further reason we should dismantle the bloated dangerous military/intel/police state to fund #healthcare for all #WeGotThis."

Part of our struggle is to stand for viable economic alternatives to military service, for trans people and everyone else. As trans activist Dean Spade wrote:

The liberation we are working toward requires that we fight for vets and everyone else who gets exploited and abandoned for U.S. military imperialism, but not that we participate in rhetoric that celebrates the U.S. military as an employer or ties trans well-being to military service.

It's true that trans people face serious unemployment and poverty, but what kind of job is military service? Thirty percent of Iraq and Afghanistan veterans have contemplated suicide, 43 percent say they are not seeking mental health care because they fear it will negatively impact their careers, and 80 percent say they do not think vets are getting as much care as they need. Sexual assault is rampant in the U.S. military, with 58 percent of victims experiencing reprisal or retaliation for reporting.

I want trans people, and all people, to have what we need to get by, but I don't want anyone to have to be a soldier, cop or prison guard.

IT'S NOT any radical's first choice to end up on the terrain of defending the right of people to join or remain in a military machine that causes immense suffering and oppression, both in this country and around the world.

But there can be no conditions on equality. We defend unconditionally the right of trans people to serve openly in the military, even as we oppose imperialism, war and the ludicrous spending that the U.S. government directs toward its military.

We can and should connect the safety of trans people in the U.S. to people around the world who are harmed by imperialist war, offering a vision of internationalism, solidarity and opposition to all forms of oppression.

Such a message has the capacity to bring the many trans people who feel motivated to fight against Trump's anti-trans bigotry toward socialist politics, and to begin them on the path to be leaders of revolutionary movements of the future.

One such person is Chelsea Manning, whose other tweet Wednesday offers us some important encouragement: "so biggest, baddest, most $$ military on earth cries about a few trans people but funds the F-35? sounds like cowardice #WeGotThis."