The Bay Area Rally Against Hate is days away, and Berkeley's mayor and other officials have been putting on the pressure to stop people from attending a counterdemonstration against the alt-right on August 27. This is a statement from Rally Against Hate organizers explaining why it's important for the largest numbers of people to turn out to voice their opposition to the white supremacists' hate.

AT THIS point, it's well known within the Bay Area that far right, neo-Nazi and white supremacist groups have called for rallies in both San Francisco and Berkeley. In protest of these rallies, an ad hoc coalition called for the Bay Area Rally Against Hate in Berkeley. This rally has been endorsed by over 70 labor, community, faith, political organizations from across the Bay Area, and the list continues to grow. In the wake of Charlottesville, this ad hoc coalition called for a national weekend of action in solidarity against hate, where actions have been called from coast to coast.

Considering the outpouring of solidarity for our rally in Berkeley in recent weeks and after 25,000 people marched in Boston and victoriously stood against neo-Nazi and white supremacist groups, we in this ad hoc coalition firmly stand against the Berkeley Mayor Jesse Arreguín's call for Berkeley residents to stay home. We also reject the Berkeley City Council's decision to give the city manager, Dee Williams-Ridley, authority to quarantine areas of the city to restrict movement and curb protest. While the mayor and city officials in Berkeley continue to say that this is for our safety, we in the ad hoc coalition want to say that the most effective response to the neo-Nazi and white supremacist groups is responding to them with the widest possible numbers in a broad multiracial coalition--Boston has shown the way forward. 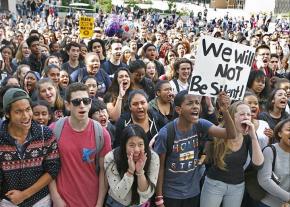 If we take the lead of city officials and stay home, the media will cover the fascists anyway, and they will get the attention they desperately want. They will spin a victory story about how cowardly the opposition is and suggest (as has been done on Stormfront and other Nazi websites) more violent actions in the future. The side opposing genocide and fascism ends up no more organized or confident. People remain afraid of being out in the streets, and hate crimes will continue to expand in frequency and severity.

We also stand against the granting of additional powers to the city manager to declare anti-protest rules on August 27, even if it's just for the day. This is an actual attack on the right to free speech for our side as well. We are also concerned that the authorities may use their expanded powers to target the oppressed, not the far right. This concern is brought to the forefront as there have been numerous reports of white supremacist organizations infiltrating police departments.

Charlottesville became a turning point as it exposed to the nation the genocidal agenda of groups trying to masquerade as patriotic advocates for the First Amendment. The weekend after 25,000 marched in Boston and demonstrated the necessity of a different response to fascist invasions of our communities: mass mobilization against this explicit threat. As a direct result of events in Boston, racist rallies have been canceled in 36 states. If they're met by a massive, multiracial, broad coalition of the overwhelming majority of society that thinks fascism belongs in the sewer of history, not in our public spaces, then we change the narrative from hate to solidarity. The neo-Nazis and white supremacists are less confident and may have a harder time recruiting anyone else to join them next time. Our side is less afraid, more confident and better organized. We step forward in our struggle to push fascists off our streets permanently and we urge anyone willing to participate in our rally on August 27.