Next week: The Socialist State of the Union

Don't break your television when Trump delivers his speech. Instead, keep calm and join us for a socialist analysis of the State of the Union.

DONALD TRUMP will give his first State of the Union address at 9 p.m. Eastern on Tuesday, January 30. But don't worry--we won't let you suffer through it alone!

During the speech, Socialist Worker contributors and our social media team will be responding to Trump's speech in real time on our Twitter feed and on our Facebook page. And as soon as the speech is over, tune in to a live-streamed response by Socialist Worker editor Alan Maass.

Trump's speech, as all State of the Union addresses are, will be a piece of political theater, with Democrats and Republicans applauding in scripted coordination.

There will be the inevitable cheers from "both sides of the aisle" for the customary harsh words directed against "our enemies" abroad. The same goes for the president celebrating "our troops"--even as veterans are abandoned by an underfunded health-care system.

While there are certain "traditional" conventions that have come to be expected during State of the Union addresses, there are plenty of questions about what kind of speech the entirely unconventional but thoroughly despicable Trump might give. 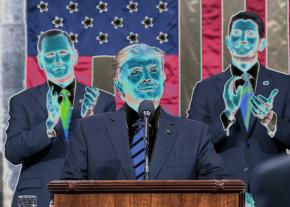 What will a man who called African, Caribbean and Central American countries "shitholes" during a White House meeting say when he takes the podium? Will he even read the speech his handlers have prepared for him? Or will he just wing it?

So watch the speech, but don't do it alone! Organize a viewing party, join the conversation on our social media feeds, and tune in directly afterward for the Socialist State of the Union.

1. Organize a viewing party to bring together friends, family and co-workers to share in the outrage.

3. Watch the Facebook livestream of the socialist response to the State of the Union delivered by Socialist Worker editor Alan Maass directly after Trump's speech ends.