Stop this cruelty toward asylum seekers

Over the last few days, lawyers with Al Otro Lado, an organization that has been giving legal support to members of the migrant caravan trying to gain asylum in the U.S., have been denied entry into Mexico from the U.S. The immigrant rights working groups of the Democratic Socialists of America and the International Socialist Organization issued this statement in response.

THE UNDERSIGNED organizations condemn in the strongest terms possible actions taken to disrupt legal counsel to members of the Central American Exodus. Specifically, attorneys of the binational nonprofit organization Al Otro Lado have been barred from travel into Mexico or forcibly removed from Mexico after the placement of alerts on their passports — this after United States authorities began actively referring asylum seekers sent back to Mexico to visit Al Otro Lado’s offices in Tijuana. These actions are mind-blowingly contradictory. DSA members from several chapters across the country have supported Al Otro Lado in a range of capacities, and we can directly attest to the importance of its mission and the organization’s vital role in migration justice. 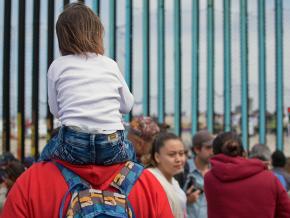 While neither the origin nor rationale of the alerts has been determined, what is abundantly clear is a pattern of obstructive behavior designed to withhold the good-faith consideration of asylum that is covenanted to individuals internationally by multilateral accords. Less than a week before, Al Otro Lado attorneys found their travel impeded, the U.S. Department of Homeland Security began implementing the “Migrant Protection Program,” returning asylum seekers back to Tijuana to pursue the major portion of their asylum proceedings from Mexico. Nearly simultaneously, the transitional shelter in Tijuana preventing the worst humanitarian outcomes was abruptly shut down, its residents turned out on the street.

When asked how asylum seekers would access appropriately trained legal counsel from within Mexico, the Department of Homeland Security has responded that attorneys funded by nonprofit agencies in the United States will provide that counsel. Al Otro Lado is the sole legal organization in Tijuana providing counsel by U.S. immigration attorneys. It is a modest operation, focused on helping asylum seekers prepare before immigration proceedings. In past statements, the organization has been clear that it cannot support the level of counsel the “Migrant Protection Program” will require.

Yet even that modest level of support is apparently too much in the eyes of the U.S. and Mexican governments. By circumventing the sole opportunity for migrants to receive fair counsel, these governments close the portal on thousands of caravaneros’ aspirations for a better life, and to escape systematic violence in their countries of origin, created by decades of U.S. imperialist intervention. These U.S. and Mexican administrations will continue to exert pressure unless and until the international community demands and fights for an end to this catastrophic violation of human rights.

We see this fight as part of a binational struggle for migrant liberation. Government intervention to hinder Al Otro Lado’s efforts is part of a systemic suppression of the work of immigrant rights activists on both sides of the border, as we have seen with the recent prosecution of No Mas Muertes organizers, the order of deportation against immigrant activist Alejandra Pablos and the deportation of immigrant activist Eduardo Samaniego. Without vocal and coordinated efforts to defend the work of fellow immigrant rights organizations and activists, state forces will continue to attack the crucial work of the immigrant rights movement.

We unequivocally demand the U.S. and Mexican governments end the obstruction of legal counsel that is understood among all liberation-minded societies to be our human due, and we unequivocally support the attorneys of Al Otro Lado and all other proponents for the just and humane advocacy of those most vulnerable to global inequity.