An alternative to the Games

Elizabeth Lalasz reports on the voices raised against Chicago Mayor Richard Daley's plan to bring the Olympics to Chicago.

CHICAGO--Over 200 people attended a panel discussion January 31 on opposing Chicago's bid to host the 2016 Olympic Games. This was the first public meeting of a recently formed group No Games: Chicago, which came together in opposition to Mayor Richard Daley's Olympics push.

The meeting gained unexpected attention when a pro-Olympics group working with Daley called on its supporters to attend and disrupt the forum.

No Games was approached by Arnold Randall, a former commissioner with the city planning department and now part of Chicago 2016, the pro-Olympics group established by the mayor's office, who wanted a spot on the panel. No Games refused, offering instead to debate Randall one on one in the future.

Chicago 2016 then sent a mass e-mail to its 10,000 volunteers, urging them to attend and dominate the meeting. There was a rumor that buses were being organized to get pro-Olympics people to the forum. "I think the intent of the e-mail is to try to drown out debate and discussion," Bob Quellos, who helped organize the new group, told the Chicago Tribune. 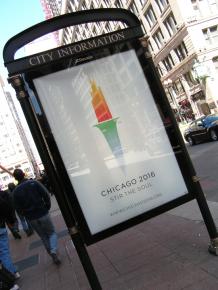 In the end, though, pro-Olympics forces had only enough people to fill a few rows in the meeting room, and they were mainly silent. And as a result of the attention, representatives from No Games were able to make their case against the Chicago Olympics bid to national and international media, including National Public Radio, the Tribune, the Wall Street Journal and the Times of London.

AT THE meeting, panelists elaborated on the No Games theme: "Better Hospitals, Housing, Schools and Trains. NO GAMES." "When you look at previous Olympics and the effects they have on host cities," Quellos said in introducing the meeting, "the impact has overwhelmingly been negative, leaving a trail of debt, corruption and civil rights abuses."

Debra Taylor from Southside Together Organizing for Power (STOP) and a resident of the Ida B. Wells housing project, which is threatened by the Olympics plan, explained her opposition to the Games:

They displaced us from our homes, and now comes the Olympics. There is nothing to be gained by the poor residents of the city of Chicago...

There are no resources right now. There are no jobs, they're closing our schools--half the schools are charter schools. They're closing our hospitals--they shut down Michael Reese, and Cook County is on its last leg. They've given us Section 8 housing...I say: if you've got something for us, give it to us now.

No Games: Chicago will hold its first organizing meeting on February 7 at 3 p.m. in the meeting room at Jak's Tap, 901 W. Jackson. For more information and updates on activities, go to the No Games Chicago Web site.

You can also sign a petition protesting the Chicago Olympics bid online.

Five Ring Circus: Myths and Realities of the Olympic Games, by Christopher Shaw, looks at money and power behind the Olympics by documenting how Vancouver won the 2010 Winter Games.

For more on the scandalous history of the Olympic Games, look for Dave Zirin's Welcome to the Terrordome: The Pain, Politics and Promise of Sports

Karen G.J. Lewis, a teacher in the Chicago Public Schools and member of the Caucus of Rank and File Educators in the Chicago Teachers Union, talked about why it's important to have our voices heard. "I could probably benefit from this," she said. "I live in this area and could rent my place out for $10,000 to $12,000 for the week. But I won't do that, because my gain at someone else's displacement is wrong."

"When the people with money make the decisions," she continued, "then we know what's going to happen. Those of us who are working stiffs don't get to make these decisions, but we need to have our voices heard...

"One of my heroes is Jenny Simms. She's president of the British Columbia Teachers Federation, and a fierce woman, who said, 'Tell five people your story.' So do it in the grocery line, in the bank line. It doesn't have to be people you know...The children of Chicago can't afford the Olympic Games."

Willie R.J. Fleming of the Coalition to Protect Public Housing called Chicago's Olympic bid an "atrocious act committed on a large scale." "We don't have to go too far back to find one of these--to the recent closing of 25 schools in mostly communities of color, the demolition of housing, homeless people sleeping on Wacker Drive, on buses and trains, to the closing of mental health clinics," he said.

Chris Shaw, author of Five Ring Circus: Myths and Realities of the Olympic Games made the case concrete by detailing the disaster of the forthcoming Winter Games in Vancouver, B.C., which he has organized against:

People have this idea that the [International Olympic Committee] comes together for the love of sports, and the bid organization here does it because they love sports, too...It's an appealing message...But it's not true, and it's been a long time since the Olympics have been about that.

At the local level, it's always driven by real estate developers doing what that they've wanted to do for a long time, and they want you to fund it for them...At the international level, the IOC uses sports and athletics as a marketing tool.

Shaw went on to talk about how Vancouver has suffered from the Olympics coming to town, including a $6 billion bill already that taxpayers are responsible for, plus the unknown costs of project overruns, as well as labor and civil right violations.