If we don’t speak up, who will?

Michael Ratner, president of the Center for Constitutional Rights, responds to the claim of some Barack Obama supporters that the left is being too hard on the president.

AT A reception I attended the other day a progressive acquaintance came up to me and said the left "must stop bashing Obama. Keep doing it, and he will lose the election. We should be thankful for what we have."

I am not sure he thought that I was one who bashed Obama, or he just wanted to get that message out in the community. As it happens, I do not "bash Obama," whatever that means; but I am sharply critical of a number of his policies and practices and those of his administration. (This is not to say I would have preferred McCain to win; I would not have, and on some issues, mostly very safe ones, Obama has made some difference, e.g. Ledbetter Fair Pay Act, ending the HIV exclusion.)

I responded to my acquaintance: "It won't be the criticism of progressives that will lose him the election--we hardly have that kind of power. It is his own actions especially around economic issues that could make his reelection difficult; actions that have alienated and angered significant segments of the unemployed American population. I don't do my work by thinking about whether it will help or hurt Obama in the next election. I don't tailor principles to politics." 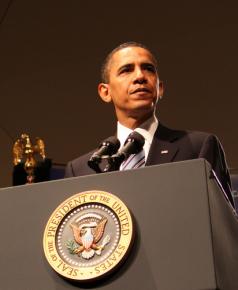 In arguing that we should mute our criticisms of Obama, we are being asked to accept administration actions that are unacceptable; practices that will involve the deaths of thousands and the violation of our own constitution and binding treaties. I have always believed we must advocate and act on principle, and that is the way to make change. So when we see that Obama will continue the preventive detention scheme that underlies Guantánamo, that he will have detainees tried before military commissions, that he will continue the incommunicado detentions at Bagram and hide detainees from the Red Cross, we cannot and should not stand by in silence.

We are seeing the continuation of Bush's law and the deterioration of fundamental protections of freedom. When we see Obama hide illegal acts behind claims of "state secrets"; when he refuses to have the torture conspirators investigated and prosecuted; and when he even welcomes some of the conspirators into his administration, we must speak up.

Granting impunity to officials who torture is to insure that we will again be a nation of torture and that the message heard by every petty dictator around the world is: The United States can torture in the name of national security, and so can we. When we see officials of this administration attack the Goldstone report, which documents war crimes in Gaza, we understand the deep hypocrisy of this government.

Nor can there be any screaming that is too loud in opposition to the wars that Obama is continuing without end. The July 2011 beginning withdrawal date from Afghanistan was shown to be a fiction within an hour of Obama's speech. Obama, like those before him, accepts that "We are the United States, and war is what we do." Obama and the presidents before him are bleeding our country and world.

OF COURSE, I do not expect miracles from one man on top of a huge national security establishment that is hard to buck. Rome was not built in a day, and neither will it be dismantled in a day. But I don't see a lot of dismantling going on. What I see is more and more building of a national security state--perhaps with a softer hand--and that is alarming.

As I said when I began this piece, I do not think progressive and liberal criticisms on most of these issues or other disappointments, such as Obama's failure to end "don't ask, don't tell," will have much effect on the next presidential election. Even the war probably won't have much to do with who is our next president. Obama took a safe course, at least for himself and the next election: he gave the generals roughly what they asked for, and the Republican secretary of defense, like the cat that ate the canary, is smugly satisfied.

It seems likely to me that the economy will be Obama's Waterloo. He has shoveled billions and billions into the big banks and the wars, and almost nothing into creating jobs and saving people's homes. Regarding the jobs meeting he convened to help with ideas about how to reduce unemployment, he said there are "limits to what government can do and should do," and that he was open to "responsible" and "demonstrably good" ideas to create jobs.

I don't think that is what the over 15 million unemployed in the country wanted to hear. They need jobs, and they especially did not want to hear Obama say there was not going to be enough money to do it. The danger here is not just that Obama will lose the next election; but it's one we have already begun to see: a right-wing populism that often occurs in times of great economic dislocation, income disparities and joblessness.

We are at a time of great economic insecurity; a time when fundamental rights are under threat from our own government and a time when we are the world's warriors. Silence or passive acquiescence is complicity. Enough already! We can applaud Obama's actions when they are right; we cannot and should not excuse or explain away his actions when they are wrong. If we don't speak out, who will?