It didn't happen under Reagan, and it won't now--tax breaks for the rich don't trickle back to us. But as Alan Maass reports, the Democrats will probably go along anyway.

GET READY for another compromise in Washington.

And yes, it'll be one of those compromises--the kind where the Democrats do the compromising, and the Republicans get exactly what they were asking for a few months ago.

Sometime in the next few weeks, Congress will vote on whether or not to extend the tax cuts enacted early in George W. Bush's presidency that expire at the end of this year. Both parties are agreed on extending the breaks for the vast majority of taxpayers. But Democrats have been vowing for years to end the Bush tax cuts for the richest few--the top 2 percent or so of all taxpayers.

It even seemed like Democrats might put the Republicans on the spot before the election by forcing a vote on the question. But then Republicans and their friends in the media started shouting about how letting tax breaks for the rich lapse would "kill jobs" by stealing the hard-earned wealth of the multimillionaires.

It should have been easy to point out that most of the jobs created during the era of the Bush tax cuts were low-wage McJobs, and there weren't very many of them at that--and that the main thing tax breaks for the rich did was fuel a speculative binge on Wall Street that crashed the economy. 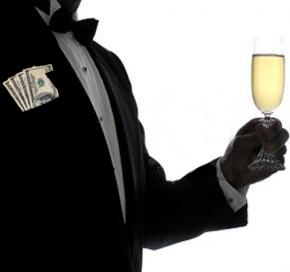 But the Democrats couldn't manage it. They gave up without a fight, shelving their legislation until after the election.

And now? "We have to deal with the world as we find it," Barack Obama's top adviser David Axelrod said in an interview with the Huffington Post last week. Axelrod went on to basically confirm what everyone in official Washington now assumes--that Congress will vote to extend all the tax breaks, probably for another two years. "[T]he writing, which has been on the wall for a few weeks, now seems to be getting clearer," wrote ABC News. "The fight over taxes won't be about whether to give the wealthiest a tax cut, but about how long the cut will last."

The fiasco around renewing the Bush tax cuts provides yet more evidence of the bottomless greed of the American ruling class, the Republicans' fanaticism and the sheer spinelessness of the Democratic Party.

It also shows that Rand Paul is a moron, but we'll come back to that.

THE BUSH tax breaks were passed in 2001 and 2003, at a cost of $1.3 trillion over 10 years. The main provision of the two laws dropped the tax rate at different income levels--the top marginal tax rate, which currently kicks in on income over about $400,000, decreased from 39.6 percent to 35 percent.

The real bonanza came at these highest levels. According to estimates at the time the Bush proposals came before Congress, the bottom 60 percent of taxpayers would get only 13 percent of the tax savings from the laws, averaging $227 less on their tax returns each year. The richest 1 percent of the population, by contrast, stood to gain 43 percent of total tax relief.

Thus, the keen interest today among the privileged few in making sure all the Bush tax breaks get extended.

The proposal made by Democrats before the election would have let the cuts lapse for the two highest tax brackets, affecting only couples with income over $250,000 and individuals making more than $200,000.

Even so, the richest 0.1 percent of taxpayers--households with an annual income over $2.7 million--would still save an average of about $60,000 a year compared to what they would have paid a decade before, according to an analysis by the nonpartisan Tax Policy Center.

Those who would benefit if the Obama administration "compromises" have been making out like bandits for decades. Wealth distribution in the U.S. is more unequal than at any point since records were kept. The richest 1 percent of Americans now take home 24 percent of total income--their share has nearly tripled in the past 35 years.

And no one should be fooled by the Republicans' talk about the fairness of keeping tax cuts across the board. The focus on the percentage the rich are taxed on income at the top marginal rate obscures the many other ways that the broader tax system guarantees they pay proportionally less than anyone else.

For one thing, most of the taxes that people pay in the U.S. are regressive, meaning that those on the lower end of the wealth ladder have to spend a greater portion of their income on them. The payroll tax that comes out of your paycheck to fund Social Security and Medicare is one example. The rate is the same whether you're rich or poor, and it's imposed on only the first $106,800 of wages, so ordinary workers have a larger-size chunk taken out of their paycheck than corporate executives do.

Another hidden bias of the tax system is the 15 percent rate on long-term capital gains and corporate dividends--basically, money made from owning stock and other investments. That 15 percent is lower than the income tax rate for everyone but the poorest households. The super-rich get more than half of what they rake in each year from capital gains, according to tax expert David Cay Johnston--and they pay taxes on those "earnings" at a rate 40 percent lower than workers at the middle of the income ladder pay on their wages.

The result, as multibillionaire Warren Buffett admits, is that he pays "far, far less" of his overall income in taxes than his secretary.

AND THAT'S as it should be, say the adherents of "trickle-down" economics. According to them, the rich use the money they save from tax breaks for the common good--unlike the rest of us, who waste it on stuff like food and clothes. All of society benefits when the wealthy become wealthier, goes the argument, because they'll spend more and invest more.

That's what Kentucky's new senator Rand Paul was trying to say on Election Night when he interrupted his victory partying long enough to unload some profound philosophical insights on a reporter:

There are no rich, there are no middle class, there are no poor; we all are interconnected in the economy. You remember a few years ago when they tried to tax the yachts. That didn't work. You know who lost their jobs? The people making the boats, the guys making $50,000 and $60,000 a year, lost their jobs.

Okay, sure, Paul sounded a little stoned with the business about the interconnectedness of the non-existent rich and poor. And if you don't remember "a few years ago when they tried to tax the yachts," that's okay, because it actually happened 20 years ago, and was actually repealed 17 years ago--and in the meanwhile, a boatload of tax loopholes have been enacted that let yacht owners, for example, take a write-off by declaring their vessels a second home.

But Paul was making sense--sort of--as long as you believe that wealth delivered into the hands of the rich eventually comes back to the rest of us in the form of jobs and a higher standard of living.

It takes some faith to believe that, which may be why fanatics like Paul talk about the mystic properties of tax breaks with the fervor of a religious zealot. The idea that you can give more wealth to the rich and expect it to trickle down to the rest of society has to be accepted on faith. There certainly isn't evidence to back it up.

Rich people do, indeed, buy "stuff," but they spend a smaller proportion of their income than the rest of us, so as a strategy for stimulating the consumer economy, giving them more money isn't very efficient. On the contrary, large parts of the Bush tax cuts for the rich ended up being gambled away in the Wall Street casino, contributing to the financial bubbles that burst in 2008. As far as the good of society as a whole is concerned, that money was flushed down the toilet.

As for the idea that tax cuts for the rich are a reliable means of creating jobs, as New York Times columnist Frank Rich wrote, "Those in the higher reaches aren't investing in creating new jobs even now, when the full Bush tax cuts remain in effect, so why would extending them change that equation?"

In a recent report, the nonpartisan Congressional Budget Office put an extension of the Bush tax cuts dead-last on a list of 11 possible options for creating jobs--and it said that tax breaks for the rich was the least helpful extension because the wealthy are more likely to bank tax savings than invest them.

The problem in Corporate America today isn't a lack of money to use for investments. As of July, non-financial U.S. companies were sitting on $1.8 trillion in cash, according to a report in the Washington Post--roughly 25 percent more than they had at the beginning of the recession.

But neither corporations nor the rich make the kind of investments that create jobs unless they see an opportunity for profit--and U.S. employers don't. For example, a mid-summer survey of more than 1,000 chief financial officers for CFO magazine found that "nearly 60 percent of those executives don't expect to bring their employment back to pre-recession levels until 2012 or later--even though they're projecting a 12 percent rise in earnings and a 9 percent boost in capital spending over the next year," the Post reported.

Ultimately, the verdict on the "trickle-down" effects of the Bush tax cuts for the rich is already in: They didn't. Even before the current crisis hit in 2008, median household income was actually lower in 2007 than in 2000. That made the 2000s the first economic expansion in history during which median household income didn't grow.

No wonder a majority of voters on November 2--even in an election where turnout was tilted to conservatives--opposed extending the Bush tax cuts for the rich.

But don't think that will stop Republicans from trying to pull off the old trickle-down trick again--or Democrats from letting them get away with it.