Who will write the next chapter in the struggle?

Barack Obama and the other Black leaders who went to the Selma civil rights march commemoration are today committed to upholding a racist system, not transforming it.

THE MARCH 7 commemoration of the 50th anniversary of the civil rights march in Selma, Alabama, prompted many people to think about how much has changed in the fight for racial equality over the past half century--and how much has not.

There stood John Lewis at the foot of the Edmund Pettus Bridge, the same spot where state troopers fractured his skull in their bloody rampage against those who dared to march in 1965 for the right to vote. Fifty years later, Lewis stood in Selma as a longtime Congressman--and alongside a Black president of the United States.

A few days earlier, Barack Obama's Attorney General Eric Holder released a scathing report from the Department of Justice (DOJ) about the racist practices of police in Ferguson, Missouri, which became nationally known after the months of protests following the police murder of Mike Brown last summer.

Holder, another high-ranking African American official, vowed that the DOJ would take over the Ferguson police department if it didn't reform itself--a far cry from the hands-off attitude that federal officials took during the Civil Rights era toward the racist police departments in Selma and elsewhere across the South. 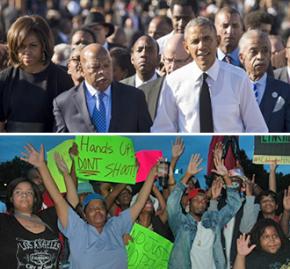 And yet, the DOJ report on Ferguson shows the great degree to which racist violence and injustice has been carried over from the time of legal segregation in the South to the modern era of officially "colorblind" criminal justice policies that Michelle Alexander has famously called the "New Jim Crow."

The report describes an American city in 2015 that uses police to extract money from Black residents through fines and tickets, like some medieval landlord taxing the poor peasants.

Investigators cited one African American woman who was given a $151 fine--plus additional fees--for parking in an illegal spot in 2007. Battling homelessness and unable to pay the full amount of the fine, she underwent an odyssey of arrests, jail time and additional fines for the next seven years. By December 2014, she had paid the city $550, spent six days in jail--and still owed $541. All for one parking violation.

Speaking in Selma just days after the release of the Ferguson report, President Obama acknowledged the obviously incomplete legacy of the civil rights movement:

The speech was vintage Obama: Words so pretty they might make someone forget their speaker has vast powers to offer much more than fine speeches.

THE OBAMA administration had an opportunity to put some teeth into its criticisms of Ferguson by pressing federal charges against Mike Brown's killer, Officer Darren Wilson.

Instead, the day after releasing its Ferguson report, the DOJ announced it wouldn't prosecute Wilson because many of the eyewitnesses who contradicted his testimony that he killed Brown in self-defense weren't "credible," according to the DOJ--the same justification that St. Louis Prosecuting Attorney Robert McCulloch gave back in November for letting Wilson off scot-free.

What is really not credible is the Justice Department having less trust in the testimony of dozens of witnesses in Ferguson than accounts coming from a police department that ha been exposed in painstaking detail as a nest of institutional deception and perjury--by the Feds themselves!

Consider another incident cited in the DOJ report: A Black man sitting in his car who verbally objected to his vehicle being searched for no reason ended up being charged with eight crimes. Among the charges were "making a false declaration," because he said his name was "Mike," instead of "Michael"--and not wearing a seatbelt, while he sat in a parked car.

The fact that the DOJ chose to believe this police department about the Mike Brown murder instead of dozens of mostly Black residents completely undermines the message and the impact of its Ferguson investigation.

Eric Holder claimed to be "shocked" by the DOJ's Ferguson report, and Obama said it revealed what was "clearly a broken and racially biased system."

But there is nothing for the Attorney General to be shocked about. Police departments everywhere have become more aggressive and unaccountable as the Pentagon tossed them leftover weaponry from the "war on terror" and the Supreme Court erased various safeguards against unreasonable police searches and seizures.

And if Obama thinks the Ferguson police department is racially biased, he should acknowledge that the same is true for the entire criminal justice system--and that nowhere, at the federal, state or local levels, has the prevailing pattern of arresting, prosecuting and imprisoning Blacks and Latinos at far higher rates than whites changed in the slightest during his six-plus years in office.

But the other reason that Obama and Holder should know there is nothing unique about Ferguson is that police across the country continue to murder unarmed Black and Brown people at epidemic rates.

One day before the commemoration in Selma, the Wisconsin capital of Madison became the latest city to erupt in protest when the police killed an unarmed Black teenager named Tony Robinson in the stairwell of his friend's apartment.

ROBINSON'S MURDER led to weeks of demonstrations in Madison, including school walkouts and rallies inside the state Capitol building--many of them organized by the Young, Gifted and Black (YGB) Coalition that formed in the aftermath of Mike Brown's killing in Ferguson.

YGB is one of many new organizations that have continued organizing local campaigns and protests at a time when the Black Lives Matter movement has dropped out of the headlines.

In New York City, activists in groups like the Coalition to End Broken Windows are protesting Mayor Bill de Blasio's call to hire 1,000 more cops instead of putting that money into desperately needed jobs and services. In Los Angeles, family members of people killed by police in recent years are working together to win a measure of justice. In Portland, members of Don't Shoot Portland disrupted a school board meeting to demand that officials hear from affected parents before passing a controversial school transfer policy.

At the same time, however, there is another kind of organizing taking place around the country. Groups connected to the Democratic Party are trying to steer people away from activism and into election campaigns.

In Ferguson, the Working Families Party (WFP) and Service Employees International Union (SEIU) are pouring money and resources into working with local groups like the Organization for Black Struggle and Missourians Organizing for Reform and Empowerment to elect new candidates to the Ferguson City Council. The pulling of local organizers into election campaigns is one reason why there wasn't a national call to action after the DOJ refused to press charges against Darren Wilson.

It would be great if there were political candidates across the country who were genuinely committed to carrying the banner of the Black Lives Matter movement. But the WFP and SEIU are committed to backing candidates loyal to the Democratic Party--which has played a terrible role alongside Republicans in reversing the gains made by African Americans since the civil rights movement.

Not only have Democrats like Obama, Lewis and Holder overseen the continuation of a racist criminal justice system. They have pushed for so-called "education reform" that closes public schools in Black neighborhoods and reduces Black children to test scores. They have overseen the slow-motion destruction of the Post Office and the loss of tens of thousands of decent union jobs held by African Americans. They have refused to raise the minimum wage to at least $15 an hour, all while bailing out the banks and waging wars across the world.

This was the true contradiction of the Selma commemoration. So much of the heroism displayed on Bloody Sunday and on thousands of other bloody Southern days is now seen as being represented by liberal Black elected officials and the Democratic Party--which together are enforcing racist policies that are pushing Black people back into the pre-civil rights era.

In order to finish the march that Obama spoke of and create a society in which Black people--and all people--are free, we need to build a national movement dedicated to struggle and political action at the grassroots, and independent of the party Obama leads.