Election 2016 is a prime example of the sad state of "democracy" in America, writes Danny Katch, author of Socialism...Seriously: A Brief Guide to Human Liberation.

The man who the Republicans will nominate to be president of the United States publicly admires authoritarians like Russia's Vladimir Putin. He encourages mob violence against protesters and then offers to pay their legal fees. He and his allies have threatened critics in the media by vowing to cancel FCC licenses and changing libel law to make it easier to sue them if Trump becomes president.

Trump's message is that he's running not for the job of president as we understand it but for a new position of strongman who will disregard legal niceties to get his way. That's what makes him appealing to those who think he stands for them--and scary for those who know he doesn't.

But as frightening as he is, Trump isn't a new threat to a healthy political body, but the latest tumor--though an especially malignant one--on a corrupt, wheezing system that can only be called a "democracy" if we use ironic quotes.

This is a "democracy" in which the two likely presidential candidates, Trump and Hillary Clinton, are disliked by 60 percent of the people--and where a majority think we should have a major third party, but the Democrats and Republicans have a Super PAC-funded monopoly every bit as strong as whichever corporate giant provides horrible Internet service to your area. 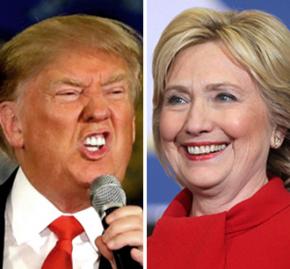 It's a "democracy" where tens of millions of people, including immigrants and people with criminal records--far more than the margin of victory in recent presidential elections--can't vote. Millions more live in cities where elected officials have been stripped of decision-making power, whether due to bankruptcy in Detroit or as punishment for voting for LGBT rights in Charlotte, North Carolina.

Even when people are eligible to vote in this "democracy," it often turns out they can't--because they encounter hours-long lines at voting sites or find out they are among the hundreds of thousands who have been mysteriously purged from the voting rolls.

These routine and widespread violations of Article 21 of the Universal Declaration of Human Rights are barely covered in the media, and they generate a fraction of the outrage as a single Bernie Sanders supporter picking up a chair at a Nevada party convention.

Finally, this is a "democracy" that puts such a low value on the integrity of elections that it entrusts its voting machine codes not to the government but to private corporations, many of which are owned by executives with Republican connections and criminal histories.

Victoria Collier of Harper's noted the gross irony in this that pretty much sums up U.S. democracy and capitalism: "Although many felons (and prior felons) can't cast a ballot in America...these particular felons are apparently free to design and manage our entire elections industry."

EVERY ELECTION year, we're urged to exercise our sacred right to vote. But actions speak louder than words. The pathetically low priority given to making sure we have clean and fair elections sends a clear message that our votes don't actually count for much--which turns out to be completely correct.

Two years ago, political scientists Martin Gilens and Benjamin I. Page found that the U.S. political system is best described not as a democracy but as an oligarchy, in which:

Americans do enjoy many features central to democratic governance, such as regular elections, freedom of speech and association, and a widespread (if still contested) franchise...[W]hen the preferences of economic elites and the stands of organized interest groups are controlled for, the preferences of the average American appear to have only a minuscule, near-zero, statistically non-significant impact upon public policy.

Donald Trump acknowledges this reality--revels in it, actually--and promises supporters that finally they can have a "real leader" working for them, instead of Goldman Sachs. The result is that someone who can't speak in public for five minutes without spouting an obvious untruth comes across to many as the only authentic guy in politics.

It's also revealing that both liberals and conservatives sounding the alarm about Trump's existential threat to our "democracy" advocate that the way to fight him is with less democracy.

For Republican Robert Kagan, Trump's rise isn't the product of the racist poison his party has been spreading for years--not to mention the disastrous Iraq war that Kagan zealously promoted--but from the eternal threat, long feared by elitists like Alexander Hamilton, "that the people in a democracy, excited, angry and unconstrained, might run roughshod over even the institutions created to preserve their freedoms."

Leading Democrats, meanwhile, have a less philosophical message: The only way to stave off the Orange Menace in November is to start cheerleading Hillary Clinton pronto--and that means Bernie Sanders better stop criticizing her, stop asking people to vote for him in the remaining primaries, and start promoting "unity" with a candidate he isn't united with on any number of important political questions.

The rough translation in both cases: We have to get rid of some of the democracy that does exist in order to save it.

THE WAY to fight against Trump's threat to democracy isn't to get in line behind the Clinton wing of the oligarchy, but to build up the democratic power of the majority of people in society.

In his great series of books about Karl Marx, the U.S. socialist Hal Draper pointed out that when the word democracy was first coming into use in the mid-1800s, it had various meanings. It didn't just have the definition we use today of a political system with voting and civil liberties. It also could mean the popular will, egalitarianism, mass movements--or, simply, the people.

That's why the Chartists in England--the first large-scale working class movement in history that emerged in the 1830s and '40s--often referred to themselves simply as "the democracy." There's an echo of this older idea in today's protest chant, "This is what democracy looks like!"

But for the most part, we've lost these other definitions of democracy. That's a real problem, because in this country, certainly, the strength of our democracy has always had more to do with the strength of popular movements of workers and oppressed groups than whichever windbags were elected to Congress or the White House.

One of the main reasons we have so little democracy today, even relative to the recent past, is that protest movements are weak, having been greatly hurt in turn by recent assaults on democratic rights: Occupy encampments ruthlessly evicted (mostly by Democratic Party mayors, by the way), Verizon strikers barred from picketing in important locations, laws that make boycotts in solidarity with Palestine illegal.

That means that the fight against Donald Trump and all he stands for isn't about defending democracy so much as creating it. For one thing, we need to assert not just our right to vote, but our right to vote for someone other than the oligarchy-approved Hillary Clinton instead of an independent left-wing alternative like the Green Party's Jill Stein.

Democrats like Clinton, on the other hand, have never fought for democracy--including when their own interests were at stake.

Case in point: When the 2000 presidential election was stolen from Al Gore by George Bush and the Republicans, who stopped all the votes from being counted in Florida so Bush could keep his victory in the Electoral College, "the Democratic Party and the AFL-CIO leadership smothered the movement [to fight for a recount] in Florida, snuffed it right out," recalls union organizer Jane McAlevey in the introduction to her book Raising Expectations (and Raising Hell).

"The state was Gore's to lose," concludes McAlevey, "and the absolute determination with which the labor elite and the Democratic Party leadership crushed their own constituents' desire to express their political passions cost us the election."

Gore's team insisted on upholding "faith in the legal system," even after the Supreme Court's infamous Bush v. Gore ruling stopping a Florida recount showed that faith was absolutely misplaced. The Democrats preferred to sacrifice their own legitimate election victory than threaten the stability of oligarchy by questioning the legitimacy of one of its main institutions.

Leaving democracy in their hands means watching the U.S. political system become more and more of a "democracy." We should resurrect the old definitions of democracy that emerged from the movements of workers in struggle--and that means organizing at the grassroots to demand social change and building for a political alternative independent of the two-party status quo.