WELL, THAT was pretty much what we all thought having to spend 90 minutes with Donald Trump would be like.

After 18 months of hype and anticipation, an expected record number of viewers watched the first presidential debate to find out what most of them already knew: Donald Trump is an egomaniac who expresses his love for the American people by how many buildings he owns in their cities.

And Hillary Clinton is very well prepared to point out what a jerk he is, while saying little or nothing else of substance, especially when it comes to why people might want to vote for her rather than just against Trump.

It's a sexist trope of political reporting to talk about what Clinton wears, but I only mention that she was dressed all in red because Trump seemed to see her like a raging bull views a matador's cape, eagerly charging toward her with constant interruptions and childish retorts, my personal favorite being this one:

Clinton: I have a feeling that by the end of this evening, I'm going to be blamed for everything that's ever happened.

Trump (sneering): Why not? 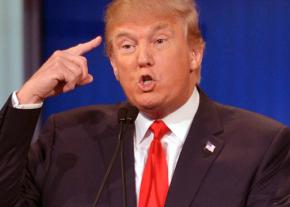 Wait, what? By the end of the night, the exhausted-looking bully seemed this close to pulling out the old "I know you are, but what am I?"

There were way too many bizarre Trump moments to recount. He repeatedly denied to moderator Lester Holt that he ever supported the Iraq War, his "proof" being private conversations he had with his Fox News buddy Sean Hannity.

He introduced a comment about the North Atlantic Treaty Organization (NATO) by saying, "I was asked on a major show, what do you think of NATO? And you have to understand, I'm a businessperson. I did really well. But I have common sense. And I said, well, I'll tell you. I haven't given lots of thought to NATO."

And then he said that NATO is only beginning to focus more on terrorism because he said it should to the New York Times--although "I'm sure I'm not going to get credit for it," he grumbled.

Trump repeated his claim that ISIS wouldn't exist "had we taken the oil" when the U.S. occupied Iraq. If you can leave aside the moral and political implications for a moment, Trump seems to think that oil can just be sucked out of the ground with a straw and put in some carryout jars.

ISIS has also been known to seize high ground to fortify its defenses. Does Trump think the U.S. should have taken Iraq's mountains?

Trump capped the evening off--after admitting to Clinton's charges that he didn't pay some of his workers because he was "unsatisfied" with their work and not denying her accusation that he called a beauty pageant contestant from Venezuela "Miss Piggy" and "Miss Housekeeping"--by complaining that Clinton's negative ads about him are "not nice. And I don't deserve that."

AS FOR Clinton, she didn't have to do much to look good other than keep putting quarters in the Trumpinator. Clinton scored some points by challenging Trump's bigotry, incompetence and ignorance. But it's worth noting the weak political content in the way she did it.

Her response, for example, to Trump's claim that in "our inner cities, African Americans, Hispanics are living in hell because it's so dangerous" was to simply praise Black churches and business owners--without talking about how a history of institutional racism produces higher rates of unemployment, poverty and crime.

This is where the exclusion of third-party candidates was really felt. Gary Johnson of the Libertarian Party and Jill Stein of the Green Party are both polling well ahead of previous third-party presidential candidates, but the Commission on Presidential Debates is a wholly owned subsidiary of the Democratic and Republican Parties, so they were kept off the stage.

Stein broadcast her own responses to the candidates throughout the debate. When Clinton claimed to have worked as secretary of state under Obama to reduce nuclear proliferation around the world, Stein talked about how Clinton and Obama support plans for a new generation of nuclear weapons for the U.S. military--which will inevitably fuel the nuclear arms race everywhere.

Even Gary Johnson, who has far less substantive to offer than Stein, tweeted about how both Trump and Clinton support NSA spying on U.S. citizens. That would have been helpful to have stated during the debate when both candidates were ranting about cyber-security.

The NSA was one of many topics not brought up by Holt in his discussion of national security--just as his questions about the economy focused on "job creation," but not the minimum wage, and his questions about police shootings was framed around "bridging the race divide."

Holt may get credit in the coming days for his handling of Trump's bullying act, but it's worth pointing out how the questions that aren't asked in a debate--just like the candidates who aren't included--are one of the key ways that mainstream political discussion is steered away from anything outside the narrow limits of the status quo.

TRUMP SEEMS to have been declared the loser of this debate, even by conservative commentators. But we'll see whether that affects the presidential race in the coming days--the campaign debates almost never have the kind of long-term impact they seem to have in the moment.

Whatever the case, Clinton's engrained politician's response of keeping quiet while Trump tied himself in knots and only challenging him on the safest of issues--like Trump's pandering to the racist "birther" lies about Barack Obama's supposedly questionable citizenship--may win her a decision on points.

But she didn't take advantage of the opportunity to shred Trump's reactionary agenda and fake populism before a massive audience--not because she isn't a good debater, but because she agrees with more of that agenda than either side ever acknowledges during a political campaign.

Over the course of September, Trump pulled virtually even with Clinton in opinion polls. Incredibly, she is seen as less trustworthy than a braggart who can't seem to make a single point without throwing in something that is opposite of the truth.

One reason for this is that Clinton represents a widely distrusted political system--one filled with politicians savvy enough to not blatantly lie, but have the end result be just as dishonest.

Another reason is that after a primary process in which both parties were rocked by outsider populist candidates, Republican voters are the ones who seem to be falling in line (mostly) behind their victorious outsider, turning the election into a more traditional Democrat vs. Republican race than many expected.

On the other side, Democratic Party leaders were always far more united against their insurgent candidate, Bernie Sanders, but the party's base voters are still showing a distinct lack of enthusiasm for getting out the vote. This is especially true among youth, who in 2008 and 2012 were a crucial part of Barack Obama's "Yes We Can" army but many of whom today are following the election less passionately than they are the epidemic of police murders that Obama has been powerless to stop--when he did something at all.

There were many complaints going into the debate about how low the explanations were for Trump. But in a sense, expectations for Clinton are just as low, since no one believes she will say or do anything to get people enthusiastic to vote for her.

Few of her supporters seem to hold out much hope that she could change any of the opinions that are supposedly already set about her. Actually, people change opinions about public figures all the time--but only if the public figures actually change their words and actions.

As Elizabeth Schulte pointed out on this website several months ago, this is the race that Clinton has been looking forward to all along--"the general election campaign against whatever right-wing monster the Republicans nominated, and when it turned out to be Donald Trump, Christmas came early in Clinton-land."

The story in the first debate was Trump. And Clinton wants to keep it that way. God help us get through the next two.