PUERTO RICO is facing a triple disaster that includes the worst the world has to offer in the early 21st century.

An unprecedented sequence of powerful hurricanes fueled by climate change. An infrastructure that was already degraded by years of debt and austerity imposed by hedge fund vultures and colonial overlords in Washington. And now a White House inhabited by a racist modern-day Nero who fiddles on Twitter while 3.4 million U.S. citizens drown.

Millions of people--with and without family on the island--are condemning Trump's response and scrambling to mobilize help, which the richest and most powerful government in the world should already have been providing.

But we need to make sure that, even as people do whatever they can during the immediate life-threatening crisis, we're building political alternatives to disaster number four, already on the horizon: The long-term plans in government and on Wall Street to take advantage of this crisis to permanently steal Puerto Rico's remaining resources from its people. 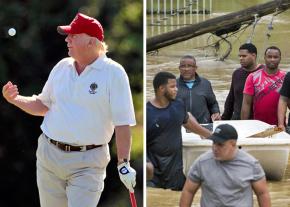 And, of course, the entire electrical grid is still down, forcing the island to rely on fuel-based generators. Fuel is being rotated to make sure the functioning hospitals have continuous power.

The scale of the devastation has complicated relief efforts: Closed roads make it difficult to reach certain regions, and the breakdown of phone service makes it harder to coordinate drivers to deliver supplies.

So while the official death toll remained at 16 as this article was being written, no one believes it will stay there. As Stephen E. Flynn of the Global Resilience Institute told Newsweek:

Several grassroots organizations are taking donations to support ongoing efforts to bring immediate relief in Puerto Rico, reach the most vulnerable populations and foster an equitable rebuilding of the island. SW urges its readers to prioritize these grassroots efforts over mainstream NGOs.

Sadly, the island is so badly damaged that there is no ability to communicate--no way to know the number of people who may have been killed in the storm itself with houses coming down, debris...Anybody who's already vulnerable and going for a long period of time without power and is reliant on medications, electronic monitoring, medical devices, as the days march on--and the days are marching on--they become a much more frail population.

THE CATASTROPHE in Puerto Rico has brought out probably the most despicable behavior we've seen yet from Donald Trump--and that's obviously saying something.

For four long days after Hurricane Maria hit Puerto Rico, Trump went on a long weekend to his New Jersey golf club and didn't say anything about the crisis.

He tore himself away from the putting greens to escalate his terrifying pissing match with North Korea's Kim Jong-un on Twitter, and even flew to Alabama to start a war with the National Football League. But "as storm-ravaged Puerto Rico struggled for food and water amid the darkness of power outages," the Washington Post described, "Trump and his top aides effectively went dark themselves."

It will be months or years before we know how many lives were harmed or lost because of the criminal delay in mobilizing crucial resources for relief and rescue during these initial days.

Instead, it wasn't until a week after the storm that the U.S. mobilized its massive military health care ship to Puerto Rico--or that Trump seemed to start considering basic responses, like suspending the Jones Act to allow foreign ships to travel directly to Puerto Rico to deliver aid.

"We're thinking about that," Trump told reporters last Wednesday, "but we have a lot of shippers and a lot of people, a lot of people who work in the shipping industry, that don't want the Jones Act lifted." Some provisions of the Jones Act are protections for maritime workers that shouldn't be suspended, but count on the business-friendly White House to put the concerns of shipping conglomerates first.

Then, Trump abruptly shifted from mostly silence on Puerto Rico to tweeting about it nonstop--but only to boast about his own performance and lash out at anyone decrying the horrific situation on the island for spreading #FakeNews.

Acting Homeland Security Secretary Elaine Duke declared herself "very satisfied" with the government response in Puerto Rico, and added that "I really would appreciate any support that we get" from the media because "it is really a good news story in terms of our ability to reach people and the limited number of deaths that have taken place in such a devastating hurricane."

But nothing has been more revolting that Trump's steady drumbeat of tweets blaming the people of Puerto Rico themselves for this tragedy--which escalated after the mayor of San Juan blasted Duke's "good news story" comment. Trump reached a new low with this tweet on Saturday:

Such poor leadership ability by the Mayor of San Juan, and others in Puerto Rico, who are not able to get their workers to help. They want everything to be done for them when it should be a community effort. 10,000 Federal workers now on Island doing a fantastic job.

IN TRUTH, millions of ordinary people, inside and outside Puerto Rico, know full well that the federal government isn't doing enough--and they have been organizing themselves to fill the breach.

As is often the case during disasters, thousands of victims are organizing themselves to try to take care of one another and meet community needs as best as possible.

The Washington Post reported last week that residents of San Lorenzo were cooking meals collectively in order to most efficiently use limited supplies. "Just like God helps us, we help each other," local resident Noemi Santiago said. "Here one person makes food one day, another makes it the other day, so that the food that we have goes further."

Similarly, an activist in Rio Piedras told SocialistWorker.org that local groups there have been organizing to assess basic needs in the absence of an effective government presence.

"The shit is hitting the fan, the island might actually be heading swiftly into a national humanitarian crisis," he wrote at the end of last week." "Most of the island still cannot receive food, water, gas, medical attention, cash. Criminality is going up quickly. Militarization is close to imminent due to the pathetic and amateur response of the central government."

Meanwhile, across the U.S., many thousands of people have thrown themselves into relief efforts--from highly publicized donations from celebrities like Pit Bull and Jennifer Lopez to the many donations and volunteer efforts inside the labor movement.

The Teamsters report that over 100 members have contacted the union to volunteer to help fill a shortage of truck drivers delivering relief on the island. A number of New York City based unions are also sending nurses and construction workers to assist in relief efforts.

Just as important as the donations and voluntary labor are the political protests that are beginning to emerge in support of the people of Puerto Rico.

Last Wednesday, protesters gathered at the Indiana state fairgrounds--where Trump was unveiling his massive scheme to cut taxes for the wealthy and corporations--and chanted, "Leave Indiana! Go to Puerto Rico!"

The next two days saw hundreds of protesters gather in New York City and Chicago to demand that the federal government "release the relief!" One of the speakers in Chicago, Sixto Lopez of the International Socialist Organization, expressed the frustration that many feel about the government's pathetic response:

Given all we know about the capacity of the U.S. military and the National Guard, if it has the capacity to move so much materiel and so many soldiers all around the world, why can't it get to Puerto Rico to distribute the aid that is piling up at the port?

This is an essential question, almost the main one asked from the beginning. For days and days, people in the interior of the island have been waiting for this aid. We have the resources. We have the technology. But the military isn't doing what it can. Instead, it's being deployed to maintain an unnecessary curfew over the people.

There are community brigades, neighbors coming together, who want to offer solidarity, who want to give their time to provide assistance to their people. When they leave to go to work, they can't--they have to stay in their houses.

THE CHICAGO and New York rallies expressed some of the political demands that arise with building real solidarity with Puerto Rico.

The one that has gotten the most attention is the permanent lifting of the Jones Act, which Trump finally suspended temporarily last Thursday. Activists should be aware of the Jones Act's labor protections, but the parts of the law that maintain and exacerbate Puerto Rico's colonial status should be lifted permanently.

But we should also be taking aim at the larger forces of debt and austerity that have been strangling Puerto Rico long before Maria--and that will completely shape relief and recovery efforts if not challenged.

For the first time in history, more Puerto Ricans live off the island than on it today, because of a decades-long economic crisis that intensified with the Great Recession of 2007-08. Puerto Rico has been the Greece of the Western Hemisphere, its economy slowly ground to dust by an unelected seven-member Fiscal Control Board created under the Obama administration last year.

Hurricane Maria will present the control board and the vultures who have "invested" in Puerto Rico's debt with massive opportunities to remake the island even more in the neoliberal model.

Many experts are predicting that hundreds of thousands of Puerto Ricans could be forced to migrate to the U.S. mainland in the coming months. Will entire neighborhoods and seaside towns be replaced by massive new estates owned by Wall Street investors as the public infrastructure of the island--from its electrical grid to its beaches--become privately owned and operated?

The point is that Donald Trump, infuriating as he is, is not the only threat to Puerto Rico. There's also the Republican-led Congress, which is--still!--more focused on an obscene tax cut plan than rescuing the 3.4 million U.S. citizens on the island.

The Democratic Party shouldn't be let off the hook either. The Obama administration oversaw the intensifying austerity that caused suffering long before Maria, and the role of the Clintons and their foundation in inflicting pro-corporate development schemes on Haiti after the devastating earthquake disaster of 2010 is a prime example of the fact that neoliberalism and colonialism are a bipartisan project.

The struggle for justice in Puerto Rico needs to be front and center in the coming days, weeks and months, as we mobilize for immediate humanitarian relief and political protests to end the suffering and oppression.