Stand up to the Proud-of-their-hate Boys

The far right have been rebuilding their numbers and confidence behind the claim that they are being persecuted. Nicole Colson exposes their lies and distortions.

THE NAZIS who will try to take over the streets in Portland, Oregon, and Berkeley, California, this weekend want everyone to think that they care about “free speech.”

But what they really want is to silence anyone whose views they don’t agree with: progressives and socialists, people of color, Muslims and people of Arab descent, supporters of women’s rights and LGBTQ equality, and just about everyone else who doesn’t adore Donald Trump. And they’re ready and willing to use violence to do it.

They go by different names — a “Freedom March” in Portland on August 4; “Say No to Marxism in America” in Berkeley on August 5; and the revolting “White Civil Rights Rally” in Washington, D.C., on August 12 — but the aim is the same: to regroup the fractured racist movement for a show of renewed strength. 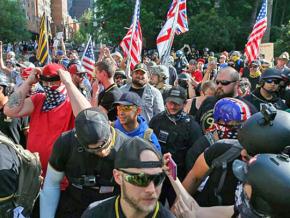 ON THE West Coast, the lead organizers of the rallies appear to be Patriot Prayer and the Proud Boys. The Portland mobilization is being organized as a march in support of Patriot Prayer boss Joey Gibson’s U.S. Senate campaign in Washington state.

Gibson claims that Patriot Prayer isn’t about racism or white supremacy, but protecting the “free speech” of conservatives and “liberating” them from the tyranny of West Coast liberalism.

But this is exposed as a lie if you look at who goes to Patriot Prayer rallies. The list includes, as Bustle.com noted, a Who’s Who of neo-Nazis and white supremacists. Jeremy Christian — the self-described white nationalist who last year slashed three people, killing two of them, when they defended a woman in a hijab he was berating — was a regular attendee.

Video of a June 30 mobilization in Portland shows the bigots, mainly members of Patriot Prayer and the Proud Boys, making a calculated and apparently premeditated attack on counterprotesters. The reactionaries marched in formation, retreated and then attacked again, rushing anti-racists who had gathered to oppose them.

Prior to the rally, Patriot Prayer had declared its intention to “cleanse the streets of Portland.” As the Southern Poverty Law Center (SPLC) documented, the bigots promised that “[t]he streets will be flowing with freedom, and the air will be filled with patriotism...Recourse will be swift, for those who wish to oppress our freedoms.”

Anti-racists are mobilizing against the far right this weekend and next. We urge our readers to join these counterprotests if you can — and visit protest websites for information about arriving and leaving safely.

Berkeley | August 5
Stop the Hate Rally, at 2 p.m. at Ohlone Park and Sacramento Street, across from the North Berkeley BART station. Sponsored by a variety of organizations. Check the Facebook page for updates.

Washington, D.C. | August 12
Rally Against Hate: #DefendDC, at 12 noon at Freedom Plaza, corner of 14th Street and Pennsylvania Avenue NW. Sponsored by the Shut It Down D.C. Coalition, with participation from numerous organizations.

The threat of violence is integral to groups like Patriot Prayer and the Proud Boys. The SPLC noted that multiple people in the crowd in Portland on June 30 were wearing pro-militia or III percent (a far-right, pro-militia group) hats. Video caught one “Proud Boy” knocking out an anti-fascist protester.

It was, the SPLC concluded , “the biggest demonstration of far-right street violence since the deadly [Charlottesville] ‘Unite the Right’ in August 2017.”

The violence of Patriot Prayer and its allies aren’t confined to their rallies. According to Willamette Week, “Two regular rally attendees, Donovon Flippo and Tusitala ‘Tiny’ Toese, have been involved in at least two reported assaults on people they allegedly attacked on the street.” In one instance, Flippo and Toese reportedly attacked an African American teenager who yelled an obscenity at them after spotting the two with a Trump flag.

According to the SPLC, in late July, Gibson and other Patriot Prayer members harassed activists participating in an “Occupy ICE” encampment in Portland, attempting to goad some into violence.

Patriot Prayer members are clearly itching for the opportunity for another violent confrontation at the upcoming August 4 rally.

Gibson is confidently predicting that “there will be conflicts, there will be violence,” and he has reiterated that Patriot Prayer members will be carrying concealed weapons. He has also stated in recent days that the group plans to send some of its members into the ranks of anti-fascist protesters in disguise. “And they’re gonna take care of business within their group, too,” he told followers.

THE OTHER main group organizing on the West Coast is the Proud Boys — a self-described pro-Western, chauvinist “fraternity” for men who, ridiculously, say they “refuse to apologize for creating the modern world.”

Al-Jazeera reported last month that Proud Boys founder, former Vice media executive Gavin McInnes, “has downplayed the group as a ‘men’s club’ that simply meets to drink beer ‘once a month,’ but he has also celebrated the violence as ‘amazing,’ often describing the violence as ‘self-defense.’”

McInnes will occasionally say that the group doesn’t support protests where members attempt to engage in violence, but this is window dressing — an attempt at some small degree of plausible deniability.

Last year, just before the Charlottesville “Unite the Right” rally, McInnes urged members to not attend. But lead organizer Jason Kessler was himself a Proud Boy, and was only expelled from the group after the deadly violence.

McInnes also claims that the group isn’t racist or anti-Semitic, but you would never know it from members’ rhetoric and actions. “McInnes plays a duplicitous rhetorical game: rejecting white nationalism and, in particular, the term ‘alt-right’ while espousing some of its central tenets,” the SPLC reported. “For example, McInnes has himself said it is fair to call him Islamophobic.”

He has also has said that he’s a sexist because “women are dumb” — and that for immigrant women, rape “doesn’t have the same trauma as it would for a middle-class white girl in the suburbs because it’s so entrenched into their culture.”

And for all his denials, McInnes has championed violence time and again. In Portland in June, he applauded a Proud Boys member who had beaten an anti-fascist protester unconscious, saying, “Check out the turning point in the war against Antifa...That is some fantastic stuff, totally inspiring stuff.”

The Proud Boys have their own paramilitary-style offshoot known as the “Fraternal Order of the Alt-Knights,” led by Kyle “Based Stickman” Chapman — who earned his nickname by beating an anti-fascist protester in the head at a March 2017 mobilization in Berkeley.

ONE FAVORITE tactic of groups like the Proud Boys is to deliberately provoke violence with left-wing protesters, attack with utter brutality, and then claim they were only acting in self-defense. As the SPLC reported, this appears to be their playbook heading into the August 4 rally in Portland and August 5 demonstration in Berkeley.

While McInnes has reportedly said that the Proud Boys are disavowing the Portland rally, according to the SPLC:

This time, the conceit remains the same but the potential for violence may be greater. As they have done for many prior rallies, Patriot Prayer...has preemptively declared any violence an act of self-defense.

But the group intends to create a combustible situation where brawls against counter-protesters are virtually guaranteed. As they’ve done before, Gibson and the Proud Boys can then hold up these clashes as evidence of rampant left-wing violence that supports the right-wing conspiracy that the left is out to start a civil war.”

An organizer of the Berkeley mobilization on August 5 announced on Twitter that a member of the Proud Boys named Jeffrey Perrine will be among those speaking. According to the anti-fascist It’s Going Down website:

Perrine has frequently attended pro-Trump and far-right rallies over the past year, but more recently he has begun to show up to leftist and even liberal events to livestream, harass and disrupt. Jeffrey has been observed yelling in the faces of high schoolers and harassing protesters at the Sacramento Women’s March. He also showed up to a protest against Jeff Sessions with several patriots and Proud Boys, where the group followed demonstrators while shouting anti-immigrant slogans, at one point directing a racial slur at a Black protester.

At least one picture of Perrine online shows him holding what appears to be an automatic weapon.

AFTER CHARLOTTESVILLE last year, masses of people across the U.S. reacted with outrage at the right’s violence — and tens of thousands of people turned out in Boston, the Bay Area and elsewhere to overwhelm further far-right mobilizations with their much greater numbers.

But the far right has been rebuilding its forces since then, and the protests this month are an attempt to test the waters to see if they can carry out their violence openly and with impunity.

The left faces important questions in confronting this renewed rise of the far right.

The June rally in Portland shows why a strategy revolving around physical confrontations with individual fascists will not stop the right. This gives the right the opening for exactly what it wants: the bigots admit openly that they want violence to occur, so they can claim self-defense.

Then there is the repression at the hands of police and other forces of the state, which are just as likely, if not more so, to target the left, and not the right. Berkeley officials have expanded the emergency powers passed before a demonstration last August, where anti-racists face the brunt of the restrictions.

Our best hope lies in organizing the largest mobilization possible to confront the fascists with much greater numbers, as part of a democratic movement. Organizers of the August 5 Stop the Hate counterdemonstration in Berkeley write:

The massive demonstrations of last August in Boston and the Bay Area proved that when we come together, we can protect our communities and politically defeat the bigots.

We know that the gatherings of the far right pose a grave threat, especially when they are commemorating their own terrorism...In the Bay Area, we are also shocked by the recent horrific, and racist murder of Nia Wilson, a recent graduate of Oakland High School. The need to organize the largest possible opposition to challenge the racists couldn’t be more urgent.

[Solidarity Against Fascism East Bay] and other organizations and community members — residents of the Bay Area, people of color, working-class people, immigrants, queer, gay, bi, and trans people, Muslims, Jews, Christians, liberals, leftists, and others — believe that the best strategy for resisting and defeating right-wing violence is to cultivate solidarity and build a united front.

Last time, this time and any time in the future, this has to be our uncompromising response when the bigots try to march in our communities: Solidarity and strength in numbers.