The independent left must oppose Islamophobia

An important debate has emerged among supporters of the Green Party campaign of Howie Hawkins and Jia Lee for governor and lieutenant governor of New York regarding the campaign’s association with figures on the left who back the Syrian government of Bashar al-Assad. After engaging with the campaign on this question and an extended discussion, the New York City district of the International Socialist Organization voted earlier this month to rescind its prior endorsement of the Hawkins-Lee campaign if the campaign didn’t publicly clarify its opposition to the Islamophobic and Assadist views put forward by these figures.

Here, SW is printing the statement of the New York City ISO, noting that this is not a statement of the ISO nationally. The discussions of the Hawkins-Lee campaign and the issues surrounding independent politics raised in this statement are ongoing, and SW encourages contributions to our website on these questions.

LAYING THE basis for an independent left is an urgent task for all those seeking to challenge the status quo of racism, sexism, inequality, environmental devastation, and imperialist war over which both establishment parties — the Democrats and Republicans — have presided for more than a century.

That’s why the ISO has participated in a number of third party efforts, many of them organized by the Green Party. In New York we have worked closely with Howie Hawkins and other Greens in many election campaigns — most recently, endorsing the gubernatorial campaign of Howie and Jia Lee as a principled left-wing alternative to Democratic Governor and machine boss Andrew Cuomo.

However, we strongly disagree with the campaign’s decision to welcome the endorsement of political commentator and comedian Jimmy Dore and to feature Dore alongside Howie at a livestream event this September in Brooklyn. A subsequent campaign email described Dore as “one of the most courageous and funniest political voices we have today.” In fact, he is a vocal supporter of the worst variety of Assadist and Islamophobic conspiracy theories on the Syrian conflict. 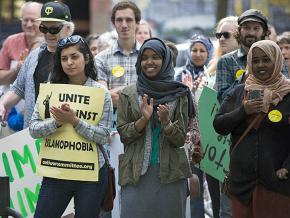 Dore’s YouTube show, with its 400 thousand subscribers, is a platform for conspiratorial arguments about Syria, including the claim that the outcry against the Assad regime’s use of chemical weapons is a “false flag” operation. Dore enthusiastically identifies with the arguments of a wide range of journalists and politicians who vilify the Syrian people, like Rania Khalek, Eva Bartlett and U.S. Rep. Tulsi Gabbard. Dore has smeared Assad opponents in Islamophobic terms, as when he accused an Arab-American BDS activist of being an al-Qaeda apologist, a dangerous charge in a country where Arabs and Muslims face far more persecution than white comedians.

Howie and other leading members of his campaign do not hold these repugnant views. But the public association of the Hawkins-Lee campaign with this reactionary political current does immense damage to our common efforts to build a genuinely left alternative to the Democrats in New York state. These unfortunate developments have caused us to reconsider our endorsement.

THE APPEARANCE of Dore in the New York Green Party’s gubernatorial campaign is connected to a larger problem within the national party and the broader left. A significant number of Green Party members and leaders are open supporters of the positions put forward by the Assad dictatorship in Syria, while many others disagree but don’t view the Syrian conflict as a central enough issue to publicly criticize these positions.

The most prominent Green Party figure to embrace Assadist arguments is 2016 vice presidential candidate and anti-racist activist Ajamu Baraka, who attacked the popular revolution that swept across Syria beginning in 2011, and insisted that the revolution’s supporters on the U.S. left are manipulated by “bourgeois hysteria” and the “white man’s burden.” Far from voicing radical anti-imperialist views, Baraka has echoed the talking points of many commentators across the political spectrum in claiming that the Syrian people who continue to resist the bloody Assad dictatorship and the devastating war it has unleashed are adherents of “Wahhabism,” “jihadism” or “terrorism.”

These views from Baraka and too many others on the left embrace some of the most toxic post-9/11 political tropes of anti-Muslim racism and the so-called “war on terror,” an attempt by ruling classes in North America and Europe, but also in Russia, China and India, to frame all Muslims resisting oppression as “terrorists” or “extremists.” In fact, only a small minority of those who oppose Assad’s state have any relation to Islamic fundamentalism, though these reactionary forces are often the most heavily armed and funded, and the most tolerated by the regime itself.

When leftists put forward such positions on Syria, they disarm our side from confronting the menace of intensifying anti-Muslim racism which is an essential component of far-right politics in the U.S. and globally.

During a political period in which the socialist movement is rapidly gaining momentum in the U.S. for the first time in decades, it’s urgent that we build an independent left that challenges the Democratic Party’s support for war and empire, not with a reactionary Islamophobia masquerading as “anti-imperialism,” but with solidarity with the popular struggles of the oppressed in every country of the world — in particular, the millions of predominantly Muslim refugees fleeing the cycles of violence and war driven by U.S. imperialism in the Middle East and North Africa.

Given that much of the new left today remains tied to the Democratic Party structure, the project that we share with the Green Party of building a new party of the left is more urgent and vital than ever. But encouraging or tolerating Assadism and Islamophobia is no basis on which to pursue the project of building a party for our side. We urge our Green comrades to ask themselves what future the party has if it’s dependent on the support of those whose views of Syria and the Middle East appear to be heading on an ever more reactionary trajectory.

We believe that it’s important for Hawkins and the wider Green Party to challenge the views of figures like Jimmy Dore and Ajamu Baraka on the Syrian conflict, and to appeal to Muslims, Arabs and Middle East solidarity activists and welcome them into the party.

Regretfully, as Hawkins’ candidacy continues to be associated with these views in the public eye, we feel that we cannot continue to endorse the New York Green Party gubernatorial campaign. At this early stage in the enormously challenging process of building an independent left party, we cannot afford to pass over the problem of Islamophobia within our own organizations and campaigns.

We hope that our comrades in the Green Party and across the growing left will join us in confronting this threat to our movement, and we look forward to continuing the collaborative work of advancing a real alternative to this country’s intolerable status quo.